The Ik: A marginalized tribe in northeast Uganda

Members of the Ik Tribe praying together in Karamoja, Uganda 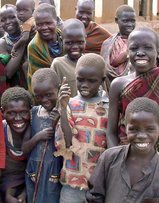 Beautiful smiles of the Ik

Introducing donated tape recorders to the Ik Tribe in Uganda

Cele and a 100-year-old grandmother who had just received the Lord, Uganda

Former missionaries to the Ik contacted Family International volunteers to see if we would be able to help by recording Bible stories in the Icetot (pronounced i-che-tot) language for a marginalized tribe, the Ik, who live on the peaks of mountains on the Kenyan/Ugandan border escarpment. We were thrilled to be able to assist them, and eventually John Mark Lomeri, an Ik tribesman, recorded enough to fill two hours of audio tapes. A charity in the U.S. generously donated hand-cranked tape recorders, which we were then able to distribute to each of the communities who live in kraals (village of huts usually surrounded by a stockade) or manyattas (homesteads) scattered along the mountain tops.

Given the fact that we would need to travel the length of Karamoja in order to reach the Ik, it was a rather daunting challenge, but it was a wonderful experience to bring the Gospel to these peace-loving people whose language is so unique.

Some months later, after having recorded a further three hours of Bible stories, and after having received a further donation of 45 hand-cranked tape recorders, we again headed north of Kaabong, this time armed with educational and medical supplies as well. The rains were unseasonably heavy, and the previous extremely dry terrain was awash in mud. The main bridge at Kaabong had been washed out, so we forded the river, and proceeded to again climb to the peaks of the mountainous escarpments to bring these needed materials to our Ik friends.

It was heart-warming hearing how the first tapes we had brought them had so wonderfully given them increased peace and strengthened their faith. The insecurity the Ik face daily with the constant cattle raiding and fighting that surrounds them, is very difficult indeed. Thank you for joining us in prayer for their protection and safety, for seeds to help their cultivating be effective despite the extremely dry terrain, and for their spiritual growth.