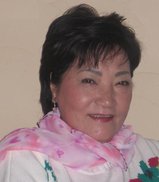 I am the daughter of a professional sumo wrestler, and was raised in a very strict household. Due to financial reasons, I had to start working when I was quite young, but once I started living on my own, I enjoyed the independence and new freedoms I experienced. I got married at 21, and was soon pregnant, but the child I carried did not make it into this world. I was hit with depression and turned to alcohol to find a way of escape. My marriage crumbled, and my husband and I divorced. I remarried, but another failed pregnancy again shattered my dreams and ended that marriage. While my heart was lonely, I was still confident that I could make it on my own. I had a good job and no financial worries. However, the work atmosphere at my company became very unpleasant, and I eventually quit my job.

Two months after that, I got a strange sickness from an unknown cause. Purple patches spread over my entire lower body, and although I was seeing a doctor, the disease became so extensive that I was admitted to a hospital for further tests and procedures. Tormented by the sickness, and overcome with fear and loneliness, I spent my days crying on the hospital bed. I was released after about a month, but was told that I could no longer work. The aftereffects of the disease left me physically disabled, and because I couldn't lift my leg, I had great difficulty walking. I was in a tattered state, both physically and mentally.

Two weeks after I was discharged from the hospital, I had an accident where I tripped and fell down a flight of stairs. The next thing I knew, I was in an emergency room and had just undergone emergency surgery. Over the next weeks, besides the financial difficulties I experienced from no longer being able to work, what caused me the most sadness was that those around me whom I'd thought were my friends left me one by one. I couldn't even use the bathroom on my own, much less eat, and I was tormented by feelings of despair, loneliness, and fear of the future. I thought to myself, I should've broken my neck when I fell, so that I had died! Why do I have to be faced with this?

Then one of the few friends who had stuck by me visited and gave me reading materials from the Family International. That was when I learned the meaning of true love. I came across a poem in the book Obstacles are for Overcoming, which moved me deeply and touched my heart.

I started seriously studying the Bible. The more I studied and read about the Lord's love, the more I felt a strong desire to share this love with others. During one of my subsequent visits to the hospital, I shared a room with an elderly woman. One of her legs had been amputated, and I spent some time talking with her and encouraging her as best I could. Even after she was transferred to another hospital further away, I continued to visit her regularly. My leg had not yet fully healed, and I could barely hobble across a street during the time the pedestrian light was green, but I praised the Lord that at least I had two legs!

Some time later, I needed to have another operation. I went to see this woman to tell her that I wouldn't be able to visit her for a while. That day, she prayed with me to receive Jesus into her heart. She smiled beautifully and said, "I'll be praying for you." On the way home, I completely forgot about my pained leg, and wept tears of joy at the thought that I—little old I—could win a soul for Jesus. Not a long time later, this elderly woman passed on, and I was so encouraged that I hadn't missed the opportunity to witness to her and secure her place in Heaven.

Each day, I pray and ask the Lord to fill my heart with His Holy Spirit so that I can be a good witness. As I hear His voice and follow what He shows me, I feel Jesus working with me and beside me.