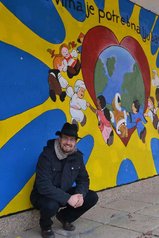 I was raised in the Roman Catholic Church, but never had a personal relationship with the Lord. When problems and difficulties started arising when I was around 15 or 16, I had nobody to turn to. I had many things this world could offer—cars, money, nice clothes, girls, friends to hang out with, good job opportunities—but still, that feeling of emptiness deep down in my soul was hard to get rid of. It was suffocating me.

My difficulties in opening up and freely communicating with others led me to drink too much, as I thought alcohol would help me through. One night when I came back home drunk, I realized I had just had a "great" evening and should have been the happiest person in the world, but … I wasn't! I thought of killing myself, since I had "everything" but was unable to be truly happy. Then I thought about Jesus and how my grandma used to teach me to pray. I decided to give Him an ultimatum.

"Change my life and show me something worth living for, or my life will end very soon!" I said to Him. In the next few months I finished high school and was waiting to go to the military [mandatory in Italy back then], when I met some friends who had just come back from a humanitarian mission to Mostar (in Bosnia-Herzegovina). I started attending their meetings, hoping to find the spiritual answers I desperately needed.

The Mostar crowd put me in touch with another group of volunteers who were working on a project in Split (Croatia) in the refugee camps. I went to Split with them to help out on the project for 20 days, and my life started to change. I was surrounded by different kinds of volunteers—some more involved in the political aspect, others more involved in pacifism. But Stefano and Sandro who were talking about Jesus, got my attention.

In the beginning, it wasn't even the things they were saying, but mainly their loving attitude and the spirit they were carrying that impressed me. I wanted to know more about them.

We started talking, and sharing their faith with me, and I accepted Jesus as my savior, started reading God’s Word, and a new life began opening up before me. The Lord answered my cry! He showed me the way! I now knew what to live for, and that feeling of emptiness was filled with the love of Jesus. So when I went back to see my parents and my sister, they were shocked at the idea of me becoming a missionary. I told them that I had received Jesus and that in giving His love to others I had found real happiness.

Now I'm a member of the Family International in Rijeka, happily serving the Lord, helping with the different projects in our community here. I hope and pray to continue to do this for a long, long time.