Love in Action versus Xenophobia

Fun in the sand box

Having fun with the toys

Portia teaching the rudiments of Cricket 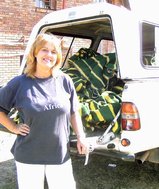 A refugee camp was set up in our area to house the victims of the xenophobia attacks that were happening here, and we were first on the scene to help. Surrounded by thick and high barbed wire, the camp is somewhat depressing. We assessed the needs and worked to deliver 120 blankets, clothes, and toiletries.

We noticed early on in our visits that the children were playing in a rubbish skip (dumpster) as there were no other facilities. We made a plan and went to work.

Our response team, mainly made up of our teenage volunteers, loaded into the minibus with play equipment for the camp. When we arrived we asked where we should set up the play area, we were told that the children had a play tent but that it was completely empty!

Children rushed around us in excitement as they watched our team set up their tables and chairs and begin face painting the children. Our young volunteers are experts with their face paints and are in big demand for corporate functions, but these amazing girls are also used to working in squatter camps and setting up just about anywhere. They do a wonderful job painting arms and faces and they always remain patient, however long the queues may be.

We then unloaded the sand pit, complete with sand and toys, and set out the giant building blocks and the seesaws. There was a mad rush for the toys, as by this time the children had been in the camp for some time with no play equipment whatsoever.

We organised races for the children, and the winners all received prizes of packets of sweets. Of course, we also gave all of the contestants prizes, because it really is not possible to turn away sad little faces! Next we set up a cricket game much to the delight of the boys.

At the end of the afternoon we began to pack up the face paints, and the children started to sadly pick up the toys to carry them back to our mini bus. But then they were thrilled when they found out that we were leaving all the equipment there for them.