The Story of Sally 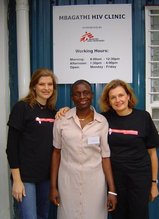 Anisa, Sally, and Iris during an Aids conference in Nairobi

HIV/AIDS is one of the greatest social and economic challenges in Kenya today. It has had, and continues to have, a devastating impact on all sectors of society. Although in recent years the national prevalence has reduced slightly, Kenyans currently living with HIV/AIDS number 1.4 million, 10% of whom are children. There are also estimates of 1.5 million AIDS orphans currently in Kenya, and at least 1.5 million people have died of AIDS in the last 20 years. In 1999 the government of Kenya declared HIV/AIDS a national disaster.—Director of Medical Services, Kenya, National Training Curriculum on HIV/AIDS Care 2005

To me, Sally is a true-to-life Mother Teresa or Florence Nightingale, a saint who labours joyfully and tirelessly amongst those who are in the depths of poverty and the scourge of AIDS. Called by the Lord to a ministry not many are called to, she seems to receive special strength from above, to which her happy smiles and joyful countenance testify. Knowing where she's been all week and what suffering she has witnessed, is always a testimony to me of God's grace, love and power. I marvel at her happiness, when we meet for classes.

HIV positive!
I, Sally, tested positive for HIV in 1999, which meant the end of life to me. Though I knew the Lord, it was too much for me to bear.

Before I discovered the devastating news of being HIV positive, I was working as a secretary for an insurance company, where I met volunteers from the Family International and had become a fond reader of the Activated Magazine. After becoming very ill due to my condition, to the point of literally fighting for my life, I lost my job, my friends, and all that I had lived for. In the depths of despair I stopped reading God's Word and slipped into deep depression.

Reaching the end of the road
At this point it seemed completely out of reach for me to ever feel well again and so low did I sink, that I tried to commit suicide by jumping off a ferry into the Indian Ocean. To me, this was the only sure way to end it all, being a non-swimmer. Through a string of miracles, my friend's prayers, and the Lord's intervention, I was rescued.

While I was out there in the ocean, trying to sink, the Lord intervened and spoke to me in a very real and tangible way. He told me that I had a future to fight for and that there were many people who needed my help and that He was going to heal me. These are some of the verses I received: "Behold, I am the Lord, the God of all flesh, is there anything too hard for me?" (Jeremiah 32:27). "For I know the thoughts that I think toward you, saith the Lord, thoughts of peace, and not of evil" (Jeremiah 29:11). "I am the Lord who heals you, and I will take away from thee all sickness" (Exodus 15:26). And today I can testify that God is the only one who gives real meaning to life, and that He is the greatest doctor in the universe! True to His Word, God has healed me! I have not fallen ill since.

"A ray of light reached my darkness"
Thanks to the Family International's prayers, friendship, and encouragement, as well as the Word, I pulled out of this state of depression and started to fight for my healing. Quickly I got healed from TB and other AIDS-related infections. The opportunity arose for me to receive the anti-retroviral treatment, which gave me a boost physically and started the healing process, until today I'm completely cured of HIV/AIDS. All of last year, I underwent a string of tests which all proved negative, including the repeated viral load tests. After much prayer and in counsel with the doctor who has been treating me, I've stopped taking the ARV drugs, since they have many side effects, and I have been feeling healthier than ever.

This experience has been a tremendous boost to my faith and is a testimony to many, even though a lot of people I talk to don't believe that I ever was HIV positive and my cure provides no logical explanation, since AIDS is supposedly incurable and one can only admit that it is a miracle through God's healing power if one is healed.

A new day
For several years now I've been working as a community worker and AIDS counsellor with an international medical NGO in Nairobi, and my present work offers plenty of opportunity to work with AIDS patients, to pray, encourage, and share my faith with them, as the Lord promised He would use my life for.

The Activated magazines and other Family International publications provide excellent material to teach people about faith and help them through hardships and struggles, and to fight for their lives. Finding faith through God's Word builds their faith to keep up the fight against HIV/AIDS.

Every morning as I wake up I ask God to use me, and guide and direct me as I go out to minister to AIDS patients at the Mbagathi District Hospital in Nairobi. I pray with more than 30 patients daily. Some are afflicted with full-blown AIDS. I ask them to receive Christ in their hearts, and I see the Lord help and save many people each day! I get to share a lot about life after death with the patients, which gives them a glimpse of Heaven and the glorious future ahead, and this eases their suffering and despair.

I am in the hospital for two hours, then move on to the Kibera slum which is not very far from the hospital. There too, I find AIDS patients, most of whom are bedridden. I pray with them and read the Activated magazines and Get Activated booklets with them. Initially I used to make copies, but I now get 50 copies of Activated every month, sponsored by donors, which proves to be such an encouragement to those in need.

A personal word of encouragement to all those living with HIV
Positive spiritual attitudes can enhance health. Praising God for His goodness, even when things go wrong, is the ultimate form of positive thinking. Have faith that God will work things out and continue to take care of you. We do not know what the future holds, but we know who holds the future! "A broken spirit dries the bones, but a merry heart does good, like medicine" (Proverbs 17:22). "He that shall endure unto the end, the same shall be saved" (Matthew 24:13).