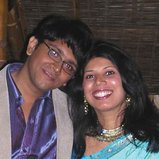 Ever since childhood, I have been inspired by the heroes and legends of yore. Well this is nothing unusual, as most of us during our childhood have been fascinated by the stories we read about brave men and women, who defied, challenged, and overcame the odds. Influenced by the stories I read, I made up my mind on certain virtues and values, one of them being bravery. Soon I became molded into an enthusiastic young individual whose thoughts on bravery were, "Here I come to save the world!"

Before I got married, my wife and I worked in the same office. One of my wife's colleagues, on being informed that I was her fiancé, said to her, "Oh, you are getting married to him? I thought he was aloof and unapproachable." I had always thought of myself as an affable and amicable person, but after hearing this comment I realized that I was living in my own paradigm. From there on I decided to put myself under observation. I noticed that I was friendly to only those whom I chose to be. I also realized that I was hesitant to talk to others about whom I had preset notions.

Thus began a series of introspective moments. I spent these moments speaking to Jesus and began seeking where I was wrong. In these moments, Jesus was loving and re-assuring, however His answer left me nonplussed. In summary, what He said was, "Love is the real bravery. You could conquer the world and yet if you cannot love the person next to you, then you are not brave. You are afraid and held down by the real enemy, yourself. Until you can overcome yourself and love others, your bravery is naught."

Most of us want to be brave by being strong, courageous, and accomplishing feats at the office and at our home. But Jesus said, "Now abideth faith, hope and love. The greatest among these is love." In our pursuit to be brave we forget the essence of life, love.