Naliya After The Quake—First Relief Mission 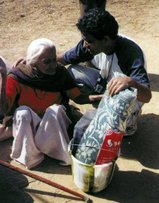 This grandmother who had lost everything in the quake was very thankful for the comfort and supplies we gave her.

Simon helps a man retrieve what he can from the ruins of his house. Several weeks after the quake, the man still hadn’t ventured inside for fear that one of the frequent aftershocks would bring what was left of his roof down on him.

On January 26, a massive earthquake rocked India and caused staggering devastation in parts of Gujarat state in western India. Tens of thousands of people lost their lives, and hundreds of thousands more were left homeless. Many Family communities throughout India became involved with the relief effort. The following is from our New Delhi communities, which sent two relief missions to Gujarat in February and March.

I had never slept in a truck before. I didn’t think I could. But as the 10-ton vehicle carrying food, clothing, and medical supplies for the earthquake victims lumbered down the Delhi-Jaipur Highway and into the night, I dozed in the seat behind the driver’s. Two jeeps carried the rest of our nine-member team.

It had been a busy week. With the help of many friends, we had been able to collect nearly one and a half tons of milk powder, two tons of rice, three tons of other grains, blankets, medical supplies, clothes, pots and pans, and more. Family volunteers had worked around the clock to gather the supplies and pack them into “family kits.” (Each family kit contained milk powder, rice, dahl [lentils], sugar, tea, candles, matches, a pot, a bucket, a jerry can, two blankets, a chatai [plastic mat], and three bars of soap.) Now we were setting out to personally deliver the goods to the earthquake survivors.

Thirty-six hours later, we reached the city of Rajkot, in Gujarat. There we learned that the taluka (a subdivision of a district) of Naliya, only 75 km (48 mi) from the epicenter of the earthquake, had received very little aid. The area had, in fact, suffered not one natural disaster, but three in the past three years: a death-dealing cyclone in 1999, a severe drought in 2000, and now this! The Lord made it clear where He wanted us. We headed for Naliya.

The quake had flattened most of the stone huts in the area, and the villagers had almost nothing left. Their meager belongings now buried under tons of rubble, they were living out in the open. Even those whose homes were only partially damaged weren’t living in them for fear that they would collapse in one of the aftershocks. The people in these small villages had few neighbors that they could call on for help in their hour of distress, and they had been all but overlooked by national and international relief teams that had been concentrating their efforts on Gujarat’s more populated cities and towns.

One woman broke down as she recounted to us how a wall had fallen on her daughter. “My young grandson is motherless,” she said between sobs. “He calls every woman that passes by Mommy.”

An old man led me to a pile of wood and stone and said, “That was my home. Everything I have is under there.”

A small boy sat and stared into the desert that stretched eastward to the horizon. “His father died in Bhuj,” the boy’s friend whispered in my ear.

We based our relief operation out of a school that was still standing (and made it a point at night to sleep as close as possible to the exits, in case of strong aftershocks). We left the school around 8:30 each morning, went to as many villages as possible, and returned around 9:00 at night. Our last deliveries were nearly always done in the dark, as most of the villages had little or no electricity. Within days, we had distributed nearly 1,000 family kits in 90 of the worst affected villages in Naliya.

We also made it a point to interact with and encourage the children in most of the villages we visited. Their school buildings had been destroyed in the quake, and by this time it had been about three weeks since they had gone to school or had any other organized activities. While some members of our team distributed relief supplies, others of us gathered all the kids together for games, songs, and stories. The children in most of the villages understood Hindi, and where they didn’t we found a bilingual villager to translate into Kutchee, the local dialect. The sight and sound of the children playing and laughing seemed to reduce the sadness and sense of tragedy that hung over every village. Soon even many of the older villagers joined in the fun.

I don’t think I’ll ever forget the people of Sargwara, a desert village of 55 families where every dwelling had been razed. The sun had set by the time we got there, but when they saw our convoy coming over the hill, the entire village came out to meet us. We gave out family kits by the light of our jeeps’ headlights. After the distribution was over, the headman pointed to the sky and told us in Kutchee, “God sent you all here just in time. We did not know what we were going to do. We had lost everything. Thank you for giving us hope!”