Little Is Much if God Is in It

Nearly finished for now. Anders on the roof of the house after it was painted, repairing and cleaning the chimney. 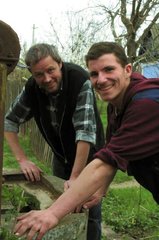 Water break. Anders and Dima at the well.

Work in progress. Philip (right), Gallina, and her two oldest boys about to start the wallpapering. 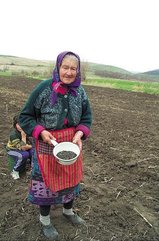 "Care to join me?" asks Babushka as she pauses from sowing sunflower seeds in their field.

Gallina (center) and some of the children, outfitted in their new clothes, enjoy a rare ice cream treat.

Philip, Anders, and Tim unload some of the goods the team from Denmark brought Gallina and the children.

Babushka (far left) proudly shows the children's schoolwork to Rita and Annelise at the Odessa apartment.

What started out as a small donation of shoes, clothing, and a little food soon grew to much more than any of us expected.

The donation went to Gallina, a woman of very modest means who cares for abandoned children with the help of her 86-year-old mother, affectionately called Babushka (grandmother). Gallina presently provides a home and motherly loving care for 16 children. Some came straight off the street. Others were brought to her. She has raised several of the teen-agers since they were babies. Others she nursed back to health, as they were very sick when she received them.

When we met Gallina and her mother, the two women explained their plight—how they hadn't been able to get official recognition as an orphanage, and therefore had to manage on Gallina's mother's meager pension and no state support. With so many children to care for, Gallina was unable to work to bring in more income. Sometimes they didn't have enough food for their next meal. It hasn't been easy, but Gallina's love for the children and conviction that this is her calling in life has given her the strength and determination to go on.

Our hearts went out to them, and we started helping as often as we could by bringing donations of food, clothes, and shoes that had been given to our work. Each time, Gallina would be overwhelmed. "I am speechless! I feel so rich!" she once said, referring to the fact that there was food in the cupboard.

We also started writing and telling others about Gallina and her children, and before long began receiving occasional monetary donations from abroad for them. Some gifts were designated for food or school supplies, while others were for whatever the current need might be. One donor sent brand-new clothes for all of the children, and a local friend pledged a monthly cash gift.

Gallina and her mother live with the 16 children in a small apartment downtown, near one of Odessa's noisiest, dirtiest, and most crowded outdoor markets. We learned, however, that Gallina had inherited a very old house on a small plot of land in a remote village about 160 km (100 mi) north of Odessa.

It had been Gallina's dream to one day cultivate the land to help feed her children and generate more income. She had also hoped to eventually fix up the house enough to provide a summer home for the children, away from the big city and their small overcrowded apartment.

Gallina's dream was to come to pass much sooner than any of us expected!

After we wrote Anders, one of our supporters in Denmark, about Gallina's farm, he began collecting building materials. Then last spring, he and his wife Annelise and another couple, Tom and Helen, took a month off work to come and meet Gallina and the children and help renovate the farmhouse. Tom and Helen's two teenage sons also came. They brought with them a couple of vanloads of food, clothing, paint, an electric water pump, bathroom fixtures, and other construction materials.

During that month, the land was cultivated, the farmhouse was renovated inside and out, and the well was refurbished. In the process, just about everyone in the village got involved in one way or another.

Babushka plowed and sowed the field, then cooked a big pot of hot soup for everyone each evening. Gallina's oldest boys helped with the renovation. The oldest, 19-year-old Dima, became Anders' righthand man. Gallina stayed with the other children in Odessa, but managed to visit a couple of times to see the work in progress.

Our friends worked until their hands were torn, clearing the land and renovating the house. They also lived in very primitive conditions, with no plumbing or running water. For the first two or three weeks they had to sleep in their vehicles in below-freezing temperatures. In the evenings, everyone huddled around a campfire to stay warm. All of this they did cheerfully in order to help others much worse off than themselves.

Before the team returned to Denmark, Anders and Dima mapped out the next work project and drew up a list of materials needed. Then Anders gave Dima a gift to cover the costs.

Gallina, her children, and the people of her village will never be the same! They had "seen the love of God in action," as they put it, "through people who don't even know us."

Now Gallina has a new dream: to be able to take in more children. She comes face to face with the need daily, as there still are many unwanted and uncared-for children roaming the streets of Odessa.