To Vukovar, with love

From Stephen and Esther
Vukovar, Croatia

Esther (back row, second from right) with some of the children who always surrounded her as we built the playground-park. 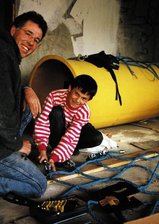 Stephen and a young helper work on a rope bridge. This boy's father was killed in the war.

Here are two sections of the finished playground. You can imagine how many children live in those high-rise apartments in the background.

The city of Vukovar is situated in eastern Croatia, on the Danube River, close to the Serbian border. Vukovar fell to the Serbs in November 1991. By that time, heavy shelling by Serbian tanks and artillery had caused extensive damage to nearly every structure in the city, and all Croats were forced to leave. The region was then resettled by Serb refugees—estimated at more than 150,000—who were fleeing war in other parts of the former Yugoslavia.

In December 1995, Vukovar was given back to the Croatian people in 1998, and Croats began returning to their homeland.

On our first trip to Vukovar, we brought much-needed humanitarian aid. We arrived with our clown outfits and guitars, hoping to go door to door and distribute the aid personally and witness to people. When we reached Vukovar, workers from Caritas (a charity organization under the auspices of the Roman Catholic Church) were waiting for us. They took us to the house of an older couple that had agreed to put us up. These dear people didn't have much, but they insisted on sharing what they had.

The city was in ruins. We made a tour, arranged by a local priest, which included visiting historical sights and three mass graves. It's one thing to watch the horrors of war on the TV news, but to hear firsthand accounts of what these people had been through sent chills down our spines. The Lord showed us that our ministry there was to be one of encouragement.

As we prayed about what we could do to show these people that God loved them and hadn't forgotten them, we received a most unexpected answer: "Build a playground for the children. It will be a bridge between the people."

That sounded great, but we had no idea where to start. We had learned how to lay tiles, hang wallpaper, and build kitchens and bathrooms when we lived in Russia—but a playground?

We made a trip to Western Europe, where we visited a number of playgrounds and manufacturers of playground equipment. One company offered us a discount on a full playground.—The discounted price? Only US$75,000! We wondered if we were on the right track, but the Lord kept reminding us that He had promised to supply according to our faith.

As a team we do it better!

Family members from Vienna helped us transport the playground equipment to Vukovar. We worked out of the Family community in Zagreb, Croatia. Family volunteers David and Gabe left their own projects to come and help. Without the help and support of these other Family members, this project would have been much more difficult, if not impossible.

We worked from 7:30 a.m. to 6:00 p.m. for one month straight. The finished product consists of five play areas in a 2,000 square meter park. In one section, a tunnel and a hanging net connect three tall towers, and a chain bridge, a fireman pole, and two slides provide challenging but safe activities for older children. The second, a hill section, sports a climbing ramp, a nine meter (30 feet) slide, and three tunnels. The third, for younger children, has a low tower, three more swings, another slide, a climbing ramp, a shaded sandbox, a seesaw, and two carousels. The other two sections have swing sets and climbing nets.

An elderly man who had been watching us work gave us a dove he had carved from a block of wood. "Thank you for doing this beautiful thing for us!" he said. "God bless you!"

Day after day, people came to talk, to pour out their hearts about all they'd been through and to thank us for what we were doing. "This is just what we needed. Our children didn't have any place to play. This isn't merely a playground, but a beautiful park!"

We also had plenty of volunteer helpers in the children who always surrounded us. They came from everywhere, bearing flowers, chocolates, sweets, and other small gifts, and they always wanted to help. Some helped us nearly every day from beginning to end."You didn't come here to talk about it," the mayor of Vukovar told us as he presented us with a clay dove (the symbol of Vukovar) and two beautiful kravata, or neckties (the necktie was invented by Croats). "You came and did it yourselves," he continued. "You have been an example to us. Thank you!"