From Japan With Love 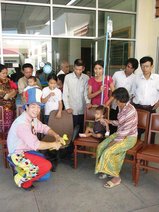 “It’s wonderful to have you back!” The head doctor’s assistant at the Phnom Penh Pediatrics Hospital gushed with enthusiasm as he led us from the parking lot to the main building. “We can’t wait to see the show!”

Iron-framed cots filled much of the hospital lobby, and on each was a sick child and one or both parents. Due to a severe lack of funding, the hospital can’t afford a nursing staff, so new patients are only admitted on the condition that a parent or someone else will supply all the necessary food and bedding, as well as look after the sick child around the clock. Most of the cots were bare of bedding except for a grass mat and perhaps a pillow or two.

We had teamed up with a group of young Family International volunteers from Japan who had prepared a clown-and-magic show for the children. They also brought copies of a Christian children’s book in Khmer, the local language, and small origami birds to pass out after the show.

We began with a performance in the lobby, at first to those in beds there and eventually to quite a few more as the lobby gradually filled up. Parents brought their sick children from other wards, some with an IV drip in one hand and a baby in the other, as they all watched, spellbound.

Afterwards we split up and went to various wards. Clowns made balloon sculptures for the kids who hadn’t been able to come to the show, while the rest of us passed out the books and origami birds. Many of the children stared at their gifts as though they were treasures too good to be true.

Some parents begged us to pray for their children, which we did, and over 20 of the parents also prayed with us to receive Jesus. Everyone received large doses of hope and cheer.