1000 tools distributed to 750 households of victims of Typhoon Yolanda

Truckload of donated items for Typhoon Yolanda victims in Cebu 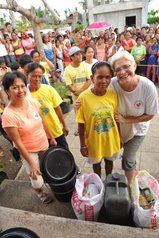 Jenny and Elisabet give aid to typhoon victims in Cebu

On November 8, 2013, Typhoon Yolanda struck, causing catastrophic destruction in the Visayas. Typhoon Yolanda, the deadliest Philippine typhoon on record, particularly affected Samar and Leyte, where most residents lost some family members or relatives. Many of the cities and towns on the islands of Leyte, were largely destroyed. In Tacloban alone, ninety percent of the structures were either destroyed or damaged, with the death toll in the thousands. Journalists on the ground have described the devastation as "off the scale” and “apocalyptic."

TFI members from across the Philippines, as well as Thailand and Indonesia, joined in the relief efforts to bring needed goods, comfort and encouragement to survivors. The following photo journal represents some of the efforts of TFI members in devastated areas.