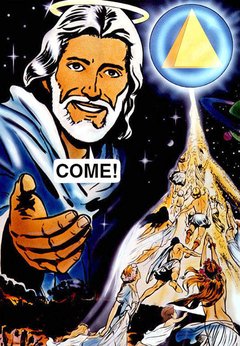 When Jesus returns at the Second Coming, He is not going to be coming secretly, but the whole world is going to know it. He will come with a lot of fanfare, a lot of light. It will be like lightning shining from the east unto the west, like continuous lightning; the whole sky is going to be lit up. In 1 Thessalonians 4, it says that the Lord Himself shall descend from heaven with a shout, and with the voice of the archangel, and the trump of God shall sound.

I don’t see how you can have the whole skies light up, Jesus Himself descending from heaven with a shout and the voice of the archangel and the trumpet of God, and not have the whole world know it! In fact, John in Revelation 1:7 tells us, “Behold, He cometh with clouds, and every eye shall see Him, and they also which pierced Him. And all kindreds of the earth shall wail because of Him.” That doesn’t sound like a secret rapture or a secret coming.

Every place in the Bible that you read about the coming of the Lord, there’s a lot of commotion going on, stars falling from the heavens, sun and moon darkened, and loud noises, earthquakes, voice of the archangel, shout of the Lord, trump of God. Graves open and the saints rise from the dead. Not just spirits, but the new bodies of the resurrected. And we saints who are alive and remain shall be caught up together with them in the air, right in front of the world.

Why should God want to keep that a secret? Jesus is not going to come secretly so that nobody knows if He came and went; that’s not what the Bible says. He’s going to come with a tremendous light show and fanfare of trumpets, the greatest spectacle the world has ever seen!

It’s going to be the greatest light show ever. Everybody’s going to see Him coming in the clouds: light, trumpets, voices, thunders, earthquakes, noises, dead rising from the graves, the live saints rising from the ground, floating up through the ceilings and the buildings and the cars and right up into the clouds to be with Jesus. That doesn’t sound like a secret rapture, and it’s not going to be.

But what about the scriptures in chapter 5 of 1 Thessalonians, “But of the times and the seasons, brethren, ye have no need that I write unto you. For yourselves know perfectly that the day of the Lord so cometh as a thief in the night.”1 People who believe in a secret rapture before the Tribulation will say, “See there! He’s going to come as a thief in the night. Nobody’s going to know when He came and nobody’s going to know when He left. It will all be very secretive and quiet.”

For he says, “But ye, brethren, are not in darkness, that that day should overtake you as a thief.”2 In other words, it shouldn’t take you by surprise. “Ye are all the children of light, and the children of the day: we are not of the night, nor of darkness.”3 We’re not in the dark on this question. We know Jesus is coming, and we know how He’s going to come. We’ll even know when He is going to come.

In Matthew 24:29–30, Jesus says: “Immediately after the tribulation of those days shall the sun be darkened, and the moon shall not give her light, and the stars shall fall from heaven. And the powers of the heavens shall be shaken. And then shall appear the sign of the Son of man in heaven: and then shall all the tribes of the earth mourn.” What are they mourning about if they don’t even know what happened? What are they crying about if it was so secret that nobody knew what happened, if suddenly a lot of Christians disappeared and they don’t know what became of them?

He didn’t say it was going to be before the Tribulation; He said after the Tribulation. The sun will be darkened and the moon will not give her light, stars fall from heaven, powers of the heavens are shaken, sign of the Son of man in heaven, all the tribes of the earth mourning. What could be more cataclysmic, dramatic, terrific, and more obvious than this kind of coming of the Lord? And it says specifically after the Tribulation.

“And then shall appear the sign of the Son of man in heaven: and then shall all the tribes of the earth mourn, and they shall see the Son of man coming in the clouds of heaven with power and great glory.”4 The whole world is going to see Jesus come. Everybody on earth! Everybody on every side of the earth is going to see it happen. All that secret rapture, pre-Tribulation rapture is unscriptural. It’s going to happen just as Jesus said and just as Paul said, “after the Tribulation,” in great power and great glory.

Some Christians teach a partial rapture, of a special elect, the best of the saved people that are going to get raptured beforehand. The word “elect” comes from the same Greek root word, eklektos, that ecclesia comes from, which means “the called-out ones” or “the separated ones,” or the church, the saved, the Christians. So this word simply means the saved, His church, His children. And if He starts collecting His children, He’s certainly going to collect them all and not leave some behind.

He’s not going to leave anyone behind that loves Jesus. All those who are saved, dead or alive, are going to rise to meet the Lord in the air in the clouds as He comes. First Thessalonians 4:16–17 says: “The Lord Himself shall descend from heaven with a shout, with the voice of the archangel, and with the trump of God: and the dead in Christ shall rise first: Then we which are alive and remain shall be caught up together with them in the clouds, to meet the Lord in the air.”