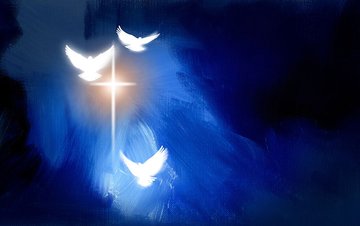 A lot of Christians who are expecting to get "raptured" (gathered into Heaven at Jesus' Second Coming) before the Tribulation are going to get the shock of their lives, because that's not going to happen. Jesus said so Himself: "Immediately after the tribulation of those days... they will see the Son of Man coming on the clouds of heaven with power and great glory. And He will send His angels with a great sound of a trumpet, and they will gather together His elect from the four winds, from one end of heaven to the other" (Matthew 24:29-31).

Why is Jesus going to return?—To gather His "elect," the eklektos in Greek, the chosen ones, the saved. Christians will have been preaching the Gospel and winning multitudes to the Lord in this time of tribulation. Why would He pull His laborers out before those few years when people will be the most desperate for salvation and there will be one of the greatest harvests of souls ever, when we'll be "doing exploits and instructing many"? (Matthew 9:37-38; Daniel 11:32-33). And if we're going to be doing exploits and instructing many during the Tribulation, we must still be here. He is going to need lots of us here to tell the world what's happening.

But if God loves saved Christians so much, some people reason, why would He let them go through the Tribulation?—To put them to the test. He's going to test their faith to see if they really believe. Will they be witnesses for Him, or will they be ashamed of Him and try to save their lives by not witnessing? He's going to purge them and refine them as by fire, His Word says, to make them white (Daniel 11:35).

I'm sorry if you're disappointed to hear that! I'm sorry if you thought you had it made being a Christian because He'd come and rescue you before anything terrible happened. He's not going to! The Tribulation is going to put us through the refining fire, but those who have real faith are going to come through like pure gold.

We know the Tribulation is going to be difficult, or it wouldn't be called the Tribulation. But still, we shouldn't look ahead to it with trepidation, expecting horrible defeat with nothing but persecution and suffering. It's going to be primarily a time of great victory over the forces of Satan and tremendous triumph over the anti-Christ wicked. It's going to be a time of terrible and awesome events, but we are going to have terrible and awesome powers to protect us and defend us and deliver us and keep us going right to the end (Daniel 11:32; Revelation 12:7-11; 17:14). We don't need to worry or fear, because God is going to take care of His own (Revelation 3:10; 7:1-3; 12:6).

Another false teaching about the Rapture is that it's only for the "best" Christians. Nobody can ever love Him enough. Nobody can ever be perfect enough, clean enough, pure enough, or holy enough except by the blood of Jesus Christ, and that's done the instant you receive Jesus as your Savior. So you don't have to worry about whether or not you're good enough. If you belong to Jesus, He is going to take you to be with Him when He comes, no matter what.

Nobody who has received Jesus is going to be left behind. Jesus promised to send His angels out to gather us from everywhere, from the four winds, from all around the world, and He won't leave one behind! He won't forget one—not one! (Matthew 24:31). Isn't that wonderful?

So if you have the Lord, you're ready! Now help others get ready. Pass on the Good News of God's love and salvation in Jesus to as many as you can. Tell your friends and family and everybody else so they may also be ready for the wonderful event that is soon to take place, when Jesus comes to rescue us out of this world and take us to heavenly places with Him for eternity. Don't let one be left behind because you failed to tell them!