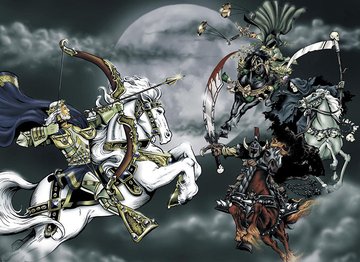 The Great Tribulation, the last three and a half years of the Antichrist's rule that immediately precedes the Second Coming of Jesus Christ, is sadly misunderstood by many people. They envision the Tribulation as a time of complete defeat and a terrifying time of hell on earth for all believers in the true God. But I can prove from the Bible that this is not the case, thank God!

First, here is the apostle Matthew's account of what Jesus told His disciples about the Tribulation and the events leading up to it.

Now as He sat on the Mount of Olives, the disciples came to Him privately, saying, "Tell us, when will these things be? And what will be the sign of Your coming, and of the end of the age?"

And Jesus answered and said to them: "Take heed that no one deceives you. For many will come in My name, saying, ‘I am the Christ,' and will deceive many. And you will hear of wars and rumors of wars. See that you are not troubled; for all these things must come to pass, but the end is not yet. For nation will rise against nation, and kingdom against kingdom. And there will be famines, pestilences, and earthquakes in various places. All these are the beginning of sorrows.

"Then they will deliver you up to tribulation and kill you, and you will be hated by all nations for My name's sake. And then many will be offended, will betray one another, and will hate one another. Then many false prophets will rise up and deceive many. And because lawlessness will abound, the love of many will grow cold. But he who endures to the end shall be saved. And this Gospel of the kingdom will be preached in all the world as a witness to all the nations, and then the end will come.

"Therefore when you see the ‘abomination of desolation' [the image of the Beast—an idol of the Antichrist], spoken of by Daniel the prophet, standing in the holy place (whoever reads, let him understand). ... then there will be great tribulation, such as has not been since the beginning of the world until this time, no, nor ever shall be." (Matthew 24:3–15,21)

He's also going to use mighty men and women, His prophets and prophetesses, to lead His people and, with supernatural help from Heaven, protect them from the Antichrist and his forces as they continue to proclaim the truth until the day that Jesus returns, when "we which are alive and remain shall be caught up ... to meet the Lord in the air" (1 Thessalonians 4:17).

"The people who know their God shall be strong, and carry out great exploits" (Daniel 11:32). The people who truly know Jesus are going to be strong, in spite of the Antichrist and in spite of persecution! The worse things get, the more God's Spirit is going to be poured out from on high to help us withstand the evil forces that will be warring against us. "As your days, so shall your strength be" (Deuteronomy 33:25).

All through the Bible there are stories about how the Lord miraculously empowered and protected His prophets and people, so I'm sure our power is going to be tremendously increased and magnified and multiplied during the Endtime. God is going to give supernatural powers to those who believe in, know, and follow Him, so that they will be able not only to defend themselves, but even to attack the forces of the Antichrist.

Revelation chapter 11 describes two of God's Endtime witnesses who will have power to bring curses and plagues upon the wicked and to actually call down fire from God to devour their enemies. What a picture of mighty men and women of God fighting victorious battles over the minions of Hell! The Antichrist won't be able to stop these two until just three and a half days before Jesus returns. The Antichrist will finally be allowed to kill them, but as the wicked are rejoicing over the two witnesses' deaths, suddenly Jesus will return in His glory to resurrect and rapture them and the rest of the "dead in Christ," the saved from all ages (1 Thessalonians 4:16; 1 Corinthians 15:51–54). It will be a mighty triumph for God's people, showing that He holds power over death itself.

I think these two witnesses of Revelation chapter 11 are also symbolic of all those who know and side with God. I believe they'll all have "power for the hour" in that day to help them survive as long as possible. The apostle Paul wrote, "Where sin abounded, grace abounded much more" (Romans 5:20). And where satanic power is going to abound, God's power is going to abound much more to protect His own. God's purpose is not going to be defeated. He's going to have millions of witnesses right up to the End.

God's Word makes it very clear that He will defend His own during those last three and a half years, not only by means of the mighty powers He will give them, but also by means of monsters and plagues that He will send to afflict their enemies. In Revelation chapters 8 and 9, we read about the "trumpets of Tribulation" and the mighty judgments that they unleash—horrible monsters released from the "bottomless pit," sent by God to torment the wicked—but He commands them not to hurt those who have the seal of God in their forehead (Revelation 9:4). When God lets loose those pestilences and plagues and monsters on the people of the Devil, the wicked, the wicked will be so busy in their futile attempts to defend themselves that they won't have much time to persecute the righteous. They may catch up with and kill some of God's people, as they are sworn to do so to those who refuse to take the mark of the Beast and worship the Antichrist—some will suffer martyrdom, even as some do today—but a host of God's people are going to march triumphant, protected by God, straight through the Tribulation!

So don't look ahead to the Tribulation as a horrible defeat with nothing but persecution and suffering. There will be some of that, but I'm convinced from both Scripture and the nature of God and His dealings with man that it's going to be primarily a time of great victory over the forces of Satan—a tremendous triumph over the anti-Christ wicked. Although they will be difficult days, God's people are going to shine brighter with the truth than they have ever shone before.

If you belong to Jesus and are following Him closely, you'll have what it takes when the time comes. You'll have power for the hour and every hour—the supernatural, miraculous power of God. The forces of God cannot be defeated, and the plan of God cannot be frustrated. If you're on God's side, you're bound to win. You can't lose. God's going to take care of you and use you like you've never been used before!