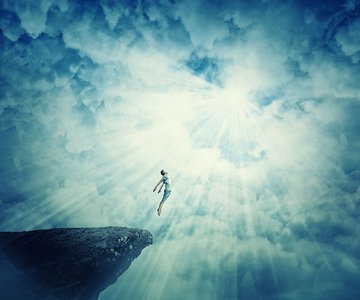 Matthew chapter 24 is quite clear on the subject of Jesus' Second Coming, when He is going to return to gather all those who have received Him as their Savior and take them with Him back to Heaven—an event commonly referred to as "the Rapture." The rest of the Bible is also clear on when this happens. That's why for nearly 1,800 years practically every Christian believed Jesus would come back after the period He refers to as "Great Tribulation"—three and a half years of intense persecution.

It's only in the last couple of hundred years that people like C.I. Scofield (1843-1921) came along with the false doctrine that Jesus would come before the Tribulation. "Don't worry, Jesus is going to come and take you out of this world before the trouble comes, so you won't have to suffer." Naturally that became a very popular doctrine.

From my experience, many Christians who say they believe in the pre-Tribulation Rapture just don't want to have to go through the Tribulation and aren't the least bit prepared for it, so they come up with their own interpretation of the Scriptures. But the Bible specifically says not to do that. "No prophecy of the Scripture is of any private interpretation" (2 Peter 1:20).

In Matthew 24, Jesus' disciples ask Him what will be the sign of His return, and Jesus answers with not one but a number of signs—wars, famines, pestilences, earthquakes, persecution of Christians, a proliferation of false prophets, lawlessness, a pervading lack of love, and the Gospel being preached in every nation. "Then," He says, "the end will come" (Matthew 24:4-14).

Beginning with the next verse, Jesus tells us what we can expect during the Great Tribulation—the last three and a half years leading up to His return, which is also the last half of the Antichrist's reign. Jesus also tells us what specific sign to watch for, so we'll know exactly when that period is beginning. "When you see the 'abomination of desolation,' spoken of by Daniel the prophet, standing in the holy place... then there will be great tribulation, such as has not been since the beginning of the world until this time, no, nor ever shall be" (Matthew 24:15,21). We find out in the book of Revelation that this "abomination of desolation" is an image of the Antichrist, or Beast (Revelation 13:14-15). Both Daniel and Revelation tell us that this image will be set up in the holy place at exactly the middle of the Antichrist's seven-year reign (Daniel 9:27; 12:11; Matthew 24:15-21; Revelation 13:5).

When does Jesus come back for His followers?—That's also plain as day: "Immediately after the tribulation of those days" Jesus returns (Matthew 24:29). Jesus doesn't say that when we see the abomination of desolation standing in the holy place He's about to rescue us out of this world, away from the Antichrist and the trouble to come. He warns us to head for the hills (Matthew 24:16). In other words, we will still be here.

And why did the Lord and the prophets go to so much trouble to tell us exactly how long the Great Tribulation would last—the exact time in terms of days, months, and years—if we didn't need to know these things, if we wouldn't be here, counting the days and the weeks? (Daniel 7:25; 12:11; Revelation 13:5). Jesus told us these specifics because He wants us to be able to take heart in knowing that the Tribulation isn't going to last forever, and that every passing day is bringing us closer to the glorious end.

During the Tribulation, things will get so bad that many people will think it's time for Jesus to come. But Jesus warns us not to expect Him sooner than has been foretold. He also warns us to not be deceived by either false christs who will try to deceive us into thinking that they are Christ, or by false prophets who will try to tell us that Christ's coming is imminent or that He's already here somewhere (Matthew 24:23-26). He tells us to not believe any of them, because when He comes, we will know it!

Some people who teach a pre-Tribulation Rapture go so far as to say that it's going to be a secret Rapture—that nobody is going to see Him except the saved. Nobody else is even going to know He came. All of a sudden a bunch of us are just going to disappear, and those who are left behind won't know what's happened to us.

If the Rapture is supposed to be a secret, why will the Lord make so much noise and put on such a show when He comes? His Word tells us that He's going to "come in the clouds with great power and glory." The sky will light up from one end to the other, and there will be such signs in the heavens that we couldn't possibly mistake the fact that Jesus is coming. In fact, it says that "every eye shall see Him." Everyone will also see the dead in Christ—all the saved people who have already died—rising to meet Him in the air as He comes. They'll hear Jesus, too, because He'll "descend from Heaven with a shout, with the voice of an archangel, and a great sound of the trump of God." And why are all of the unsaved going to mourn?—Because they're going to see and know what's happening (Matthew 24:27,30; "Acts 1:9-11; 1 Thessalonians 4:16; Revelation 1:7). It will be the greatest spectacle the world has ever seen.

That doesn't sound like a secret coming or secret Rapture!

And there it is again, plain as day: After the dead rise to meet the Lord, "then we who are alive and remain will be caught up together with them in the clouds to meet the Lord in the air" (1 Thessalonians 4:17).

(Continued in the following article.)