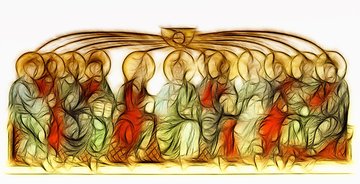 Everyone who receives God's gift of eternal life by praying to ask Jesus into their heart has also received a measure of the Holy Spirit. But receiving the complete infilling, or what the Bible calls "baptism" of the Holy Spirit, is often a separate experience that happens after you have received Jesus.

Jesus said, "He who believes in Me, as the Scripture has said, out of his heart will flow rivers of living water" (John 7:38). In the next verse John explains, "But this He spoke concerning the [Holy] Spirit, whom those believing in Him would receive" (John 7:39).

A Promise of Power

The book of Acts gives a few details about Jesus’ final moments with His disciples before His ascension. “Wait for the Promise of the Father, which you have heard from Me,” He tells them. “You shall receive power when the Holy Spirit has come upon you; and you shall be witnesses to Me … to the end of the earth” (Acts 1:4,8)

The disciples then returned to Jerusalem, where they prayed and waited with over one hundred more of Jesus’ closest followers. Their prayers were answered with a miraculous manifestation of God’s power: “Suddenly there was a sound like the roaring of a mighty windstorm in the skies above them and it filled the house where they were meeting. Then what looked like flames or tongues of fire appeared and settled on their heads. And everyone present was filled with the Holy Spirit and began speaking in languages they didn’t know, for the Holy Spirit gave them this ability” (Acts 2:2-4 TLB)

This was what they’d been waiting for—supernatural power to continue Jesus’ work now that He had departed. Suddenly, the fear, worry, and inability to act on their convictions were all gone. One of the most spectacular evangelistic experiences of all time was about to take place.

A major religious festival was being celebrated in the streets of Jerusalem, and Jewish pilgrims from many nations had come for the annual event. As Peter and the other disciples began telling pilgrims the wonderful news of God’s love and salvation through Jesus, they each found themselves speaking fluently in the languages of the various pilgrims—languages the disciples had never spoken before. As news of the miracle spread through the city, multitudes quickly gathered.

Peter climbed the steps of a nearby building, raised his hands, and shouted to the enormous crowd. He spoke to them with such conviction and authority that 3,000 people accepted Jesus as their Savior.3

Less than two months earlier, Peter had been so fearful after Jesus was arrested that he had denied even knowing Him. Now he stood before thousands in the very city where Jesus had been arrested, tried, and executed, boldly proclaiming God’s message to all! Peter had changed, just as the Lord had prayed he would ( Acts 2:41). What caused this sudden transformation?—The supernatural power of the Holy Spirit.

Be Filled to Overflowing

If you feel shy or awkward when it comes to sharing your faith with others, you’ll be happy to know that the same power is available to you. The Holy Spirit can override shyness, inhibitions, worries about what others might think, or any other natural tendencies that get in the way of your freely reaching out to others with the message of God’s love and salvation in Jesus. You may never preach to or win thousands to faith in Christ at a time like Peter did, but in the end you may win many, one at a time (Matthew 9:36).

The primary purpose of the Holy Spirit is to help you share God's message and love with others. Being filled with the Holy Spirit also helps you greatly in your personal relationship with the Lord. It gives you a stronger contact with Him and better communication through prayer, as well as much deeper understanding when you read God's Word.

And one of the most wonderful things about it is that you, too, can be filled with the Holy Spirit of God. Like salvation, you can't earn it or be good enough to deserve it. It's a gift. Then, whether you feel any change or not, you will know that you have received it because of His promise. (See Luke 11:13.)

Receive the Holy Spirit now by praying this simple prayer:

"Dear Jesus, please fill me to overflowing with Your Holy Spirit so that I can love You more, follow You more closely, and have greater power to tell others about Your love and salvation. Amen."