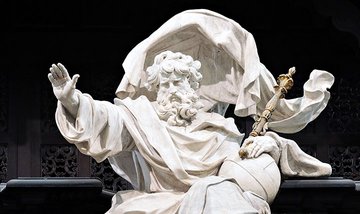 What does an omnipotent God mean to us? “Omnipotent” is defined as being all-powerful, having great and limitless power or infinite power. We will agree that God is all-powerful. He merely spoke the universe into existence and all life within it. But what effect does God’s omnipotence have individually upon us?

When we talk about the omnipotence of God, we are tempted to think it is an undisciplined attribute, which is to say everything that happens is the will of God. God can do anything He wants, and our praying is usually an appeal to His omnipotence. Will He get us out of a hardship we are facing? Will He heal a loved one? Will He intervene in all the war, suffering, and loss taking place in our world?

Galatians 3:22 says, “The Scripture declares that the whole world is a prisoner of sin.” On three occasions, Jesus spoke of Satan as being the prince of this world, and 1 John 5:19 says, “We know that we are children of God and that the whole world is under the control of the evil one.” These are verses we cannot sweep under the carpet, yet many of us feel justified in accusing God of inaction. But God does not simply look around the world, click His fingers and zap things into place. Though He is totally capable of intervening this way, He does not for the reason that His purpose for every one of us is that we come to know Him. And this is an absolute disciplined attribute of God. … But where there is prayer, where there is faith and love for God through Jesus Christ, His intervention is assured.

We are never closer to God than in our suffering and hardships. As we come to live in dependence upon Him, He places His agenda in our hearts and fills us with His peace. He may or may not heal our loved one or zap our hardships away, but we rest in the fact that we have an all-powerful God who works to the good in every situation.—Charles Price

God’s power is infinite, meaning that it is without any limits, immeasurable. As such, He not only has the power to do those things He has done, but also the power to do things He could do but hasn’t done. Some examples of such things mentioned in the Bible are raising up children of Abraham from stones, or sending legions of angels to deliver Jesus. While He has unlimited power and thus the ability to do these things, He didn’t do them.

While Scripture affirms that God can do all things, it also states there are some things God cannot do. He can’t deny Himself by going against His nature and character.1 He can’t lie.2 He can’t be tempted with evil, or tempt others with evil.3 He can’t do wickedly or pervert justice. He won’t violate His righteousness.

God’s omnipotence is an important factor that builds our faith in Him, as He is not someone who makes claims and promises which He does not have the power to perform. God has the power to deliver on what He has promised. He promised that through Abraham the whole world would be blessed; that David’s seed and line would be eternal; that the Messiah would be born in Bethlehem, would suffer and die for the sins of mankind. He delivered. He prophesied events centuries in advance; they came true. When we read His promises to us, we can put our weight down on what He has said, as He is the all-powerful Creator and sustainer of the universe and all that is in it. He who is infinite power is our Father, and we are His children. We are safe within His arms.

As sinners whose sin separates us from God, as creatures created by our Creator, there is nothing we can do to merit His love, His fellowship, His blessings; yet He has condescended to bestow these things upon us. This unmerited favor is known as His grace. He has chosen to freely give His favor and love to us, though we are unworthy of it, have no claim to it, and can in no way earn it. He gives it even though it’s unwarranted, even when it’s unwanted, and even when it is opposed. He has chosen to bestow His love upon us because He is, in nature and being, gracious. His grace is an undeserved gift from a loving and gracious God.—Peter Amsterdam

“I know you can do all things, no plan of yours can be thwarted.”4 Thus Job testifies to the greatness (omnipotence) of God. Omnipotence means in practice the power to do everything that in His rational and moral perfections (i.e., his wisdom and goodness) God wills to do. This does not mean that God can do literally everything: He cannot sin, lie, change his nature, or deny the demands of His holy character5; nor can he make a square circle, for the notion of a square circle is self-contradictory; nor can He cease to be God. But all that He wills and promises, He can and will do.

Was it excessive for David to say, “I love you, O Lord, my strength. The Lord is my rock, my fortress and my deliverer; my God is my rock, in whom I take refuge. He is my shield and the horn of my salvation, my stronghold”?6 Was it excessive for another psalmist to declare, “God is our refuge and strength, an ever-present help in trouble”?7 Not when they knew God to be omnipresent or omnipotent ... Knowledge of God’s greatness (and his omnipresence and omnipotence are aspects of His greatness) naturally produces great faith and great praise.—J. I. Packer

When you catch yourself worrying about something, realize there is nothing too great for God to handle. God Himself says to you, “I am the Lord, the God of all flesh; is anything too difficult for me?”8 Nothing is difficult for Him because His power is infinite. A. W. Pink wrote:

“Well may the saint trust such a God! He is worthy of implicit confidence. Nothing is too hard for Him. If God were stinted in might and had a limit to His strength, we might well despair. But seeing that He is clothed with omnipotence, no prayer is too hard for Him to answer, no need too great for Him to supply, no passion too strong for Him to subdue, no temptation too powerful for Him to deliver from, no misery too deep for Him to relieve.”—John Macarthur Jr.

As omnipotence is an ocean that cannot be fathomed, so the comforts from it are streams that cannot be exhausted. How comforting to know you have a God who can do what He pleases: there is nothing so difficult that He can’t accomplish, nothing so strong that He can’t overrule! You need not dread men since you have One to restrain them, nor fear devils since you have One to chain them. His power was not all expended in creation; it is not weakened by His preservation of all things. For whom would the Lord display His eternal arm and the incomprehensible thunder of His power but for His own?—Stephen Charnock