The Holy Spirit and the Primitive Church 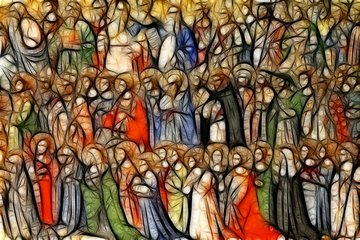 In the Old Testament accounts, the Spirit of God generally didn’t dwell permanently with individuals. With Jesus’ death, resurrection, and ascension into heaven, this dramatically changed. On the day of Pentecost, the Holy Spirit entered into the lives of individual believers, empowered them, and remained within them.

The Gospel of Luke explains that Jesus had told His disciples He was going to send the promise of the Father to them.1 In the book of Acts, Luke states that this promise was the coming of the Holy Spirit, and that they would receive power when the Spirit came upon them.2

This astounding event happened ten days later on the Jewish Festival of Weeks, known to the Hebraic Jews as Shavu’ot and to the Hellenistic (or Greek) Jews as Pentecost. It’s called Pentecost because it falls on the 50th day after Passover. Shavu’ot celebrates the time of year when the first fruits were harvested and brought to the temple, and also commemorates the giving of the Torah on Mount Sinai.

Jesus’ crucifixion took place right before the Passover, and the Holy Spirit was poured out 50 days later on the day of Pentecost. Because this was one of the major Jewish festivals, Jews and converts to Judaism from all over the known world were gathered in Jerusalem.

The book of Acts relates what happened at this momentous event:

When the day of Pentecost arrived, they [the disciples] were all together in one place. And suddenly there came from heaven a sound like a mighty rushing wind, and it filled the entire house where they were sitting. And divided tongues as of fire appeared to them and rested on each one of them. And they were all filled with the Holy Spirit and began to speak in other tongues as the Spirit gave them utterance.—Acts 2:1–4

As promised, God’s Spirit was poured out upon the disciples, which immediately resulted in their receiving power which ignited their mission of reaching the world with the gospel.3

There are five other accounts of the Holy Spirit filling believers in the book of Acts. Some of these accounts are of an initial infilling and others are of a subsequent filling of those who had already received the Holy Spirit.

When Peter and John were going to the temple and they healed the lame man, a large crowd gathered and Peter preached, resulting in 5,000 converts. Peter and John were arrested, questioned, and threatened by the high priest and his father-in-law and others. Afterwards they met with other believers and told them what happened, and these believers rejoiced in prayer with them. When praying together, “the place in which they were gathered together was shaken, and they were all filled with the Holy Spirit and continued to speak the word of God with boldness.”4

Here you see believers who are saved, and who have previously received the Holy Spirit, being filled with the Spirit again, giving them additional power to continue witnessing with boldness.

Another account of the Spirit being given to believers took place after Stephen had been martyred. The believers in Jerusalem faced strong persecution at that time, including from Saul the Pharisee, who later became Paul the apostle. Philip, one of those who was chosen to be a deacon earlier, left Jerusalem at this time and went to Samaria.5 He preached the gospel, cast out unclean spirits, and healed people who were paralyzed and lame. This resulted in much joy and men and women being baptized.6

The Jews did not consider the Samaritans to be Jewish, as they were descendants of the ten tribes of Israel who had been defeated and forcibly relocated to other lands by the Assyrians 700 years earlier. The Assyrians brought other people to populate the land, who intermarried with the remnant of Jews left in Samaria. As such, Samaritans were not considered to be pure Jews. Up until this time, the disciples had only ministered to other Jews. So when the apostles heard that Samaritans were becoming believers, they sent Peter and John to check out the situation. During that visitation, the newly saved Samaritans received the Holy Spirit.7

In this instance, non-Jews who were saved had not yet received the Holy Spirit, but did so when the apostles laid hands on them.

The next example of the Holy Spirit being given was after Saul, the persecutor of the early church, was confronted by light from heaven. Jesus spoke to Saul, asking why he was persecuting Him. Saul lost his sight, and following Jesus’ instructions spent three days in Damascus.8

The Lord spoke to a disciple named Ananias, telling him to go to the house of Judas on the street called Straight, where he would find Saul. Ananias expressed concern, as he knew that Saul was persecuting Christians, but was told that Saul was a chosen instrument who would carry the name of Jesus to the Gentiles (Gentiles refers to any non-Jewish people), kings, and the children of Israel. Ananias did as he was instructed.9

In this instance, an enemy of the Christians is converted and then filled with the Holy Spirit when a disciple lays hands upon him and prays for him.10

Acts chapter 10, verses 1–16, tells of Peter having the same vision three times, in which he sees animals, reptiles, and birds, which according to the laws of Moses are unclean and shouldn’t be eaten. He hears a voice instructing him to “kill and eat” the creatures. Peter objects, but the voice says, “What God has made clean, do not call common (unclean or unholy).”

Immediately following these visions, some men—sent by Cornelius, a God-fearing Roman centurion—arrived and asked Peter to come to Cornelius’ home. If a Jew entered the home of a non-Jew, he became ritually unclean, so it would be unlawful for Peter to go into Cornelius’ home. However, due to the vision, Peter understood that God had revealed to him that he should go, that the “unclean” were to be looked upon as clean. So he went, entered Cornelius’ home, and shared the good news that Jesus and the Holy Spirit were available to all within the household, who received the message.

Cornelius and the others—all Gentiles—believed the message Peter shared with them and consequently they received the gift of the Holy Spirit.11 In this situation, Gentiles received the Spirit at the moment they believed in Jesus.

On hearing this, they were baptized in the name of the Lord Jesus. And when Paul had laid his hands on them, the Holy Spirit came on them, and they began speaking in tongues and prophesying. There were about twelve men in all.—Acts 19:1–7

These accounts in the book of Acts portray the Spirit arriving in a variety of situations upon different people, both Jews and Gentiles, old and young, male and female, masters and servants. Certainly within the household of Cornelius, within the group of believers Peter and John prayed with, within the 120 in the upper room, there were men and women, servants, and people of all ages, just as was predicted by the prophet Joel.12

The outpouring of God’s Spirit upon ordinary people wasn’t limited to the early church. Since that time, God’s Spirit has dwelt in countless believers over the centuries. In contrast with the Spirit’s presence within only a few persons in the Old Testament, since the day of Pentecost the Spirit has been, and continues to be, poured out upon all believers, as we receive the beautiful “promise of the Father.”