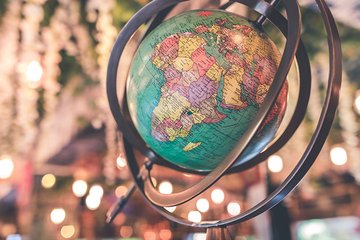 The core teaching of the New Testament can be found in one of the most beautiful verses of Scripture: For God so loved the world that He gave His only begotten Son, that whoever believes in Him should not perish but have everlasting life.1

This verse reveals the amazing truth that the Creator of the universe loved the human race so much that He sent the second Person of the Trinity—God the Son, Jesus—to become human and to die in our place for the sins we have committed, so that we wouldn’t have to suffer the penalty for those sins even though we deserve to. We have the opportunity to receive everlasting life because Jesus has paid the price for our sins through His sacrifice.

God’s plan of salvation, which was decided upon before the creation of the world, is rooted in God’s love for humankind. God’s motivation is love. The Father, Son, and Holy Spirit love us and made a way for us to be saved from the ultimate consequence of sin—spiritual death and separation from God in the afterlife, which is called hell in Scripture.

Some people have the impression that God is a cruel and angry God: that He judges people harshly because He is personally offended that they sinned against Him, and therefore He selfishly demands that they be punished. The true picture is very different. Because God’s nature includes the attributes of holiness, righteousness, justice, and wrath, in order to be true to His divine nature He must judge sin.

He could have justly punished every human being for their sins. Instead, because His divine nature also includes the attributes of love, mercy and grace, His wish was that no one should perish,2 and to that end He has made a way in which humans can be redeemed. That redemption is rooted in His love, because He “so loved the world.” His love is such that even though we are sinners, and have sinned against Him, He has, in love, made a way that we can be saved from the merited judgment for our sins. God’s plan of salvation is the manifestation of His mercy and love for humankind.

God shows His love for us in that while we were still sinners, Christ died for us.3 In this the love of God was made manifest among us, that God sent His only Son into the world, so that we might live through Him. In this is love, not that we have loved God but that He loved us and sent His Son to be the propitiation for our sins.4

God knew, before creating the universe, that human beings created with free will would sin, so He made a way to save humanity from the penalty for sin through His plan of salvation. His plan for the salvation of humankind enabled Him to be true to all aspects of His divine nature: His holiness, righteousness, and wrath, and His love, mercy, and grace.

God’s desire is to save humans, to redeem them, to reconcile them with Him, while remaining true to His nature. He was under no obligation to save us; He could have simply let all humans suffer the penalty of sin, but He didn’t. In His love for us, God made a way to redeem us. God had the plan of salvation from the beginning, which was put into play starting with Adam and Eve’s first sin and which culminated in Jesus’ death and resurrection.

Since God is the omniscient Creator, it was no surprise to Him that Adam and Eve sinned. He knew that they would freely choose to disobey Him, and in His foresight, He had already designed His plan of salvation.

His plan of salvation included calling out a people, Israel, to whom He would reveal Himself and give His commandments. It was through His words spoken to Israel that God revealed knowledge about Himself, the one true God, and His law. Israel guarded and passed on His revelation from generation to generation, thus ensuring its preservation. It was through the lineage of Israel that He sent His Son as the God-man, through whom He brought salvation to humanity.

The history of Israel is the history of God laying the groundwork for the salvation of humanity through Jesus.5 The Old Testament not only contains prophecies about the Messiah’s life and mission, but also numerous foreshadows of the salvation to come through His incarnate Son.

In order to gain a deeper understanding of salvation and redemption, of why Jesus had to die on the cross in order for us to be forgiven for our sins and become reconciled with God, it’s important to review some of the “types and shadows” within the Old Testament.

Throughout the book of Genesis there were sacrifices made to God, beginning with Cain and Abel, then continuing with Noah, Abraham, Isaac, Jacob, and others. One particular story, that of Abraham being asked by God to sacrifice his son Isaac, prefigures God’s sacrifice of His Son for the sins of humanity. When Isaac asked his father where the lamb for the sacrifice was, Abraham said that God would provide it. When Abraham was about to slay his son on the altar, the Lord then showed him a ram that was caught in the bushes, which Abraham sacrificed instead of his son. The substitution of the lamb for Isaac as a sacrifice to God portrays the concept of substitutional sacrifice, which is the basis for the animal sacrificial system which God later gave to Israel through Moses, as a means of atoning for their sins. God’s provision of the ram foreshadows His supply of a sacrifice, His Son, for the sins of humanity.6

In the second year after their deliverance from Egypt7 God instructed Moses to initiate the Levitical sacrificial system in which animal sacrifice would atone for sin. Every year on the Day of Atonement a special sacrifice was made for the sins of all the people. First the high priest made an offering for his own sins, followed by a special offering for the people.

Besides these types and shadows of atonement for sin through the substitutionary sacrifice of another in the place of the sinner, and sins of all being placed on a single “scapegoat,” there is another foreshadow in the Old Testament of things to come; namely, the understanding of God being the “Redeemer.”

In the exodus from Egypt, God Himself, through His mighty acts, delivered His people from bondage and slavery. He redeemed them and freed them. Speaking to Moses, He said:

Say therefore to the people of Israel, “I am the Lord, and I will bring you out from under the burdens of the Egyptians, and I will deliver you from slavery to them, and I will redeem you with an outstretched arm and with great acts of judgment.”8

From this point on, God was called the Redeemer. They remembered that God was their rock, the Most High God their redeemer.9 You shall remember that you were a slave in the land of Egypt, and the Lord your God redeemed you.10

The deliverance of the Hebrews from slavery was the work of God. The Hebrews weren’t able to deliver themselves from the bondage of the Egyptians.  God delivered the Hebrews through supernatural acts and wonders by His own hand, and not by their works. This was a foreshadow of the grace by which He redeems us through the work of God in salvation. It’s His work, not ours, which saves us. Salvation is available only by His grace, mercy, and love.

God’s plan of salvation through the death and resurrection of Jesus was His plan of redemption for human beings before humans ever existed. Within the Old Testament He begins to reveal His plan; and then in New Testament times when John the Baptist proclaims, “Behold, the Lamb of God, who takes away the sin of the world,”11 the fullness of His plan begins to be fully revealed.

The Lamb of God

The fulfillment of God’s plan of redemption through Jesus’ death, His sacrifice of Himself in our place through His blood shed for our sins, is repeatedly spoken of throughout the New Testament. He is the Lamb sacrificed, the one who has died in our stead, and who, like the scapegoat, has taken our sins upon Himself. He is the Redeemer who saves us from the slavery of sin. His death and resurrection is the culmination of the Old Testament types and shadows. It is the fulfillment of God’s plan of redemption. God has been holy, righteous, and just to His creations. He has been loving, merciful, and gracious. And we are beneficiaries of the greatest sacrifice ever made.

Christ loved us and gave Himself up for us, a fragrant offering and sacrifice to God.12 We have been sanctified through the offering of the body of Jesus Christ once for all … For by a single offering He has perfected for all time those who are being sanctified.13 He has no need, like those high priests, to offer sacrifices daily, first for His own sins and then for those of the people, since He did this once for all when He offered up Himself.14

He entered once for all into the holy places, not by means of the blood of goats and calves but by means of His own blood, thus securing an eternal redemption. For if the blood of goats and bulls, and the sprinkling of defiled persons with the ashes of a heifer, sanctify for the purification of the flesh, how much more will the blood of Christ, who through the eternal Spirit offered Himself without blemish to God, purify our conscience from dead works to serve the living God.15

In Him we have redemption through His blood, the forgiveness of our trespasses, according to the riches of His grace.16 God shows His love for us in that while we were still sinners, Christ died for us. Since, therefore, we have now been justified by His blood, much more shall we be saved by Him from the wrath of God.17

This is My blood of the covenant, which is poured out for many for the forgiveness of sins.18

5 Jack Cottrell, What the Bible Says About God the Redeemer (Eugene, Oregon: Wipf and Stock Publishers, 1987), 402.