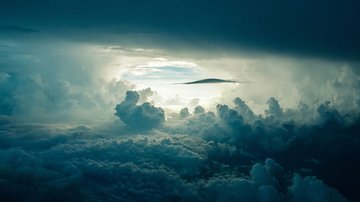 In John chapter 4, when Jesus was speaking to the Samaritan woman at the well, He told her:

God is spirit, and those who worship Him must worship in spirit and truth.1

Jesus said God is spirit. God is also uncreated, thus He is uncreated spirit. That God is uncreated makes Him different in essence or being from all created things. He’s not made of anything which was created—He’s not made of matter. He’s not just energy, air, or space, all of which are created things. He possesses a different mode of being; He exists in a manner that is distinctly different from all that has been created, including angels and human spirits. Human beings are corporeal  beings with spirits, while angels are  incorporeal immaterial beings; yet both are created beings, which makes them different from God.

As author Wayne Grudem put it, We may ask why God’s being is this way. Why is God spirit? All we can say is that this is the greatest, most excellent way to be! This is a form of existence far superior to anything we know. It is amazing to meditate on this fact.3

Because God’s being is so different, so superior to ours, we cannot understand His complete essence or being.

God is invisible. We cannot see Him. Who alone has immortality, who dwells in unapproachable light, whom no one has ever seen or can see. To Him be honor and eternal dominion. Amen.4

A question which naturally comes up when reading the preceding verses is, “What about the Old Testament accounts of people seeing God?” For example, Moses on Mount Sinai.

“But,” He said, “you cannot see My face, for man shall not see Me and live.” And the Lord said, “Behold, there is a place by Me where you shall stand on the rock, and while My glory passes by I will put you in a cleft of the rock, and I will cover you with My hand until I have passed by. Then I will take away My hand, and you shall see My back, but My face shall not be seen.”5

There were other times when God showed Himself to people in the Old Testament, such as Abraham, the Israelites when they were wandering in the desert, and the elders of Israel.

The Lord appeared to him (Abraham) by the oaks of Mamre, as he sat at the door of his tent in the heat of the day. He lifted up his eyes and looked, and behold, three men were standing in front of him. When he saw them, he ran from the tent door to meet them and bowed himself to the earth and said, “O Lord, if I have found favor in Your sight, do not pass by Your servant.”6

Moses and Aaron, Nadab, and Abihu, and seventy of the elders of Israel went up, and they saw the God of Israel. There was under His feet as it were a pavement of sapphire stone, like the very heaven for clearness. And He did not lay His hand on the chief men of the people of Israel; they beheld God, and ate and drank.7

Clearly there were times when God showed Himself to people in a form which they could see. What they saw is what is called a theophany,  which is a visible manifestation of God. Seeing a theophany is different from seeing God’s full or true essence and being.

Those in the Old Testament who saw God were able to see an outward form or manifestation of God—a theophany. This was not His full being or essence; it was not as though they were seeing all that God is, as no one can see that and live.8

Of course, Jesus is God, and He walked the earth and was seen by many people, and they lived. They saw God the Son incarnate, which means “enfleshed,” so they were seeing God in human flesh, which isn’t seeing the fullness of God in all His glory. Peter, James, and John saw Jesus transfigured on the mountain, but again that wasn’t God in His fullness, which according to Scripture, no one can see and live. However, even with what they saw, they were overwhelmed.

Jesus took with Him Peter and James, and John his brother, and led them up a high mountain by themselves. And He was transfigured before them, and His face shone like the sun, and His clothes became white as light.9

Because God is a personal being who loves us and wants us to know and love Him, He has revealed specific things about Himself to humanity through His Word. In order for Him to express to us what He is like, He communicated about Himself in terms which we could understand. Thus, when speaking to those such as Abraham, Moses, and the prophets, He spoke in words they understood, using descriptive language they could relate to.

For example, even though God is spirit and has no physical body, the Bible talks about His face, eyes, hands, ears, mouth, nose, lips and tongue, arms, hands, feet, voice, etc.10 He is also spoken of in terms of human experience, being described as a shepherd, bridegroom, man of war, judge, king, husband, etc.11 He is said to participate in human actions such as seeing, hearing, sitting, walking, whistling, resting, smelling, as well as knowing, choosing, and disciplining.12

Emotions that we experience as humans are attributed to Him, in that He is said to love, hate, have pleasure in, laugh, be sorry, be jealous, be angry, rejoice, and more.13 There are also analogies relating God to nonhuman but created things—such as comparing Him to a lion, the sun, a lamb, a rock, a tower, a shield, etc.14

Anthropomorphisms, as well as analogies, are what God inspired the Biblical writers to use to express concepts of what God is like and how we can relate to Him. While God doesn’t literally have hands, feet, ears, and eyes, such wording gives us a foundation for grasping a sense of what God is and how He relates to us.

Theologian Jack Cottrell said that this type of language is considered to be an expression of God’s condescending goodness that He would describe Himself for us in human terms so that we might better understand what He is telling us.15

J. I. Packer compares the way God speaks to us as a father who has an Einstein-like mind explaining something to his two-year-old child. The language used is simple so the child can understand, while the full explanation may be much more complex.16 The Bible says, for example, that God is love. We know what love is from our human experience, and therefore we gain a conceptual understanding of something about God. Love originates with God, it’s one of His attributes, and we, as His creation made in His image, have the capability to love; however, it’s important to understand that God being love goes infinitely beyond what we understand love to be.

Expressing something that God is, such as love, in human terms, gives us a reference point, but by no means gives a full explanation of what God being love means. The totality of God’s love is beyond any love we could ever conceive of, but the fact that we can relate to love, and have some understanding of it, helps us to get a sense of what God is like, by means of terms we can comprehend.

God is spirit, and He is also personal, along with being the living God. He has the qualities of personhood, such as self-awareness, rational consciousness, self-determination, intelligence, knowledge, and will. And since human beings, who are made in the image of God, also have personhood, one of the most relatable ways for us to conceptualize God is through anthropomorphic language. In order to express His nature and character, God used a linguistic form which reveals His personhood and which helps us to relate to Him in a way that is familiar to us.

As one author puts it: The writers of scripture know full well that God has no literal body, but they also attest that God is fully personal: He beholds human persons, He reaches out to them, and He counsels them; in these ways He has “eyes” and “hands” and “feet.” To avoid anthropomorphisms would be to fail to depict God in His living and personal reality.17

God chose to reveal Himself to humanity through the words He spoke to and through the biblical writers. In doing so, He spoke in the language and manner which they, and we who would follow them, would understand. He revealed Himself as the Living God who is personal, spirit, and invisible.

2 Anselm of Canterbury; see Ontological Arguments for the Existence of God