Diana, Liz, Sara, and Jonathan sing action songs with a group of children in Chiapas, Mexico 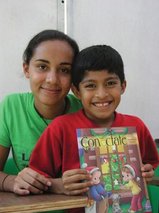 Chiapas, Mexico’s southernmost state, had been experiencing heavy rainfall for two weeks prior to Hurricane Stan, so rivers and dams overflowed when the storm hit, and many communities were destroyed.

Eight of us spent one week helping with the relief effort in the hard-hit town of Tapachula, on the border with Guatemala. It is about a 12-hour trip from our base in Puebla, and we had to cross a mountain range to get there. As is always the case when something is God’s will, He opened the necessary doors and supplied to make this possible.

Many people in the local community and at the border donated clothing and food, as well as sponsored inspirational literature for the adults and children’s books for us to give out.

We worked with the Instituto de Desarrollo Humano and the Protección Civil. Two psychologists working for the institute went with us to six of the worst-affected areas, where we held special events in each neighborhood: Our young people sang songs, performed skits, and played games with the children, while others of us passed out tracts and distributed clothing and food to the adults.

Many of the children and adults prayed with us to receive Jesus into their hearts. While our material help is limited and temporal, we know the Lord is at their side, and He will care for them always.