The Treasure and the Pearl 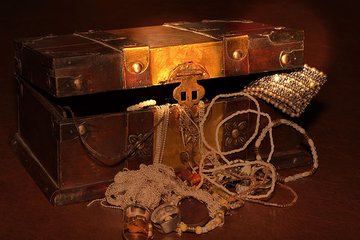 The Gospel of Matthew contains two short kingdom parables, “The Treasure in the Field” and “The Pearl of Great Price,” which are absent from the other Gospels. These are twin parables which teach about the value of the kingdom of God and the joy of finding it. Let’s take a look at them:

Throughout history, before there were safes or banks, people hid their valuables in the earth, especially in unstable times such as during war. Josephus, the ancient Jewish historian, when writing about the aftermath of the destruction of Jerusalem in 70 AD, said: Yet was there no small quantity of the riches that had been in that city still found among its ruins, a great deal of which the Romans dug up … I mean the gold and the silver; and the rest of that most precious furniture which the Jews had, and which the owners had treasured up underground, against the uncertain fortunes of war.1

Among the early Jewish writings known as the Dead Sea Scrolls is the Copper Scroll, a first-century list of valuables that had been hidden. It tells of large quantities of gold and silver, as well as coins and household vessels, which were buried or hidden in 60 different locations. Burying valuables was not uncommon. If an individual (or family) buried valuables and died without others knowing of the treasure’s whereabouts, then the treasure remained to be discovered by someone else. From time to time, individuals stumbled upon hidden treasures left behind by others—to their great delight.

The man in the parable was one such person. Now, as is common with parables, this one gives us only the information needed to make the point of the parable. We’re not told who the man was, what he was doing in the field, how he found the treasure, or what it was. All we know is that he found the treasure and covered it up—in other words, he hid it and didn’t tell anyone—and he bought the field which contained the treasure.

Jesus didn’t address whether it was moral for the man to not tell the current owner that his field contained something valuable. It seems from rabbinic writings which address such matters that, because he found the treasure, he had a right to it. Buying the land before extracting the treasure ensured no one else could claim it. Because there is no mention of the man doing anything wrong, and since the parable isn’t addressing ethics, the assumption on the part of biblical scholars is that the man’s actions would not be perceived as morally wrong. The point of the parable is that this man was overjoyed at finding the treasure, and was willing to sell all that he had to buy the field.

In the second parable, a merchant is searching for fine pearls. In antiquity, pearls were considered to be very precious gems, and were highly valued. Divers fished for them in the Red Sea, the Persian Gulf, and the Indian Ocean, and only the wealthy could afford them. First-century author Pliny the Elder described pearls as the most valuable of goods, having “the first place” and “topmost rank among all things of price.”2 Within the New Testament, pearls are classified along with gold and precious stones.3

Unlike the man who stumbles upon the treasure in the field, this parable presents a merchant—most likely a wholesale merchant according to the Greek word used—who traveled from city to city to actively search for pearls to purchase and resell. When he came across a top-quality, extremely valuable pearl, he sold all that he had to purchase it.

Jesus’ message, embedded in these two word pictures, would likely have resonated with a variety of listeners. Many people would have easily identified with the man who found the treasure in the field. He could have been a day laborer, a husbandman, a sharecropper, a foreman, a steward, or just a passerby. The fact that selling all he had yielded enough to purchase the property showed that he wasn’t destitute, but wasn’t rich either. He wasn’t expecting to find something valuable; he wasn’t treasure hunting. In the course of his normal day, he wouldn’t have expected to find something of such value. Most likely many who heard this parable would have related to him, and of course would have loved to find themselves in that situation.

The second man’s story related to a different audience, such as those who were in business. Someone with a profession such as his would have likely traveled to where pearls were sold. He was purposely looking for pearls, and he found one that surpassed all he had seen before. He clearly had to have some wealth to be in the pearl business to begin with, and the price of this pearl required his selling all that he had in order to purchase it. Anyone in business in Jesus’ audience could relate to the hope of striking it rich through taking a financial risk and coming out on top.

The idea of stumbling across a hidden treasure and taking the necessary risks to acquire it makes for an exciting story. So does traveling to exotic places, finding a great opportunity, and successfully taking it. These stories were attention-grabbers, and stirred up thoughts about the joy of discovering untold riches.

While the means of coming across these valuable items were different—one was unexpectedly found, and the other diligently searched for—both men had to take decisive action to acquire them. Discovering the treasures wasn’t the whole story—they had to sell, and then buy, and it was only through these actions that they came into possession of these valuables. In both parables, the men were faced with unique opportunities which required major action lest the opportunity be lost. Making this decision and taking the risk would change their lives.

What are the points being made through these parables? Jesus says that the kingdom of heaven is like someone who has found something of great value and takes a risk in order to obtain it. There is excitement in the discovery, an awareness of its value, and an understanding of the high cost required to obtain it. Because of its value, and the joy of possessing it, it is worth selling all to secure it. Entering the kingdom of God through Jesus' sacrifice and resurrection, becoming a child of God, and having His Spirit dwelling in us, is both exciting and valuable. Finding the kingdom is finding treasure that is worth whatever the cost. The two men in the parables sold everything to obtain the field and the pearl; but their selling everything to obtain a valuable treasure, and experience the joy of acquiring it, was more than worthwhile. Likewise, the kingdom of God is worth giving everything for. The steep cost should be seen in light of the incalculable gain.

As the apostle Paul said:

Whatever gain I had, I counted as loss for the sake of Christ. Indeed, I count everything as loss because of the surpassing worth of knowing Christ Jesus my Lord. For his sake I have suffered the loss of all things and count them as rubbish, in order that I may gain Christ and be found in him.4

Knowing Christ, being part of God’s kingdom, is to be valued above all. The concept of selling all that one has to obtain it portrays the truth that no cost is too great when it comes to gaining the kingdom; entering the kingdom is worth giving up everything else for. While living a life with God at its center costs, the eternal joy and the immeasurable value of being part of the kingdom is well worth it.