Home  »   Faith Foundations  »   The Bible  »   The Faithful and Unfaithful Servant

The Faithful and Unfaithful Servant 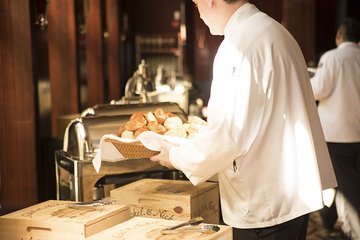 The parable of the faithful and unfaithful servant is told in two of the Gospels—Matthew and Luke. Both versions are very similar, with minor variations. The focus here will be on the account in the 24th chapter of Matthew.

The context of the parable is that Jesus was speaking to His disciples shortly before His arrest and crucifixion. They were on the Mount of Olives in a private setting and the disciples asked Him: What will be the sign of your coming and of the close of the age?1

He went on to speak of future events, which included telling them of His return: They will see the Son of Man coming on the clouds of heaven with power and great glory.2

He then went on to tell the parable in the context of His return, which is called the parousia by most commentators. Jesus told His followers that no one knows when the parousia will happen: Concerning that day and hour no one knows, not even the angels of heaven, nor the Son, but the Father only.3

Jesus also cautioned believers to be prepared for that day: Therefore you also must be ready, for the Son of Man is coming at an hour you do not expect.4

He then told a parable which emphasizes the importance of living in a manner which prepares us to be ready for the parousia at any time. He contrasts two conflicting attitudes, two choices which believers can make. He began the parable with:

Who then is the faithful and wise servant, whom his master has set over his household, to give them their food at the proper time? Blessed is that servant whom his master will find so doing when he comes. Truly, I say to you, he will set him over all his possessions.5

Here we read of a servant6 who is put in charge of his master’s household while the master is away. He is given authority over the rest of the household staff and the responsibility to administer the household in a proper fashion. This seems to be a household with many servants, and this man was given a great deal of responsibility. This servant doesn’t focus on when the master will return, as it makes no difference to the work he does; he simply fulfills his duties faithfully. Such a man will be highly commended upon the return of the master. Beyond commendation, he will be given a promotion to the position of steward, with responsibility for all of the master’s possessions.

After we’ve been given one possible scenario of a servant who has acted honorably in carrying out his duties, we are then shown what might happen if the servant were to make a different choice, and the consequences of such a decision.

But if that wicked servant says to himself, ‘My master is delayed,’ and begins to beat his fellow servants and eats and drinks with drunkards, the master of that servant will come on a day when he does not expect him and at an hour he does not know and will cut him in pieces and put him with the hypocrites. In that place there will be weeping and gnashing of teeth.7

In this passage, we see the servant having an internal discussion, something which is common in the parables in the Gospel of Luke,8 but is only found in this one instance in Matthew’s Gospel. The master is away, and for some reason won’t return when originally expected, so the servant feels he can act with impunity. In his mind, being left in charge as the overseer means he’s not answerable to others and there will be no consequences for his actions. He acts as if the master will never return and he will never be held accountable for his choices. He begins to act unjustly. His temporary authority goes to his head and he cruelly beats the other servants. The servant has lost all sense of decorum and appropriate behavior, and has separated himself from his fellow servants, as implied by his eating and drinking with drunkards.

We’re told the master does return—with no warning—and the servant is totally unprepared. Somehow this servant lost sight of the fact that while the master was away longer than expected, it didn’t mean he’d never return. Return he did, and we’re told that due to the servant’s actions, his mismanagement, harshness, and malice toward others, he is judged and condemned.

Being “cut in pieces” certainly sounds like harsh punishment. Some commentators consider this to mean being “cut off from the midst of the people,” referring to fellowship with believers, and consequently being with “the hypocrites.” Others consider that it can be interpreted metaphorically, so that it would be similar to saying the person would be “skinned alive” or some similar phrase. Yet others feel it simply means he will be punished severely. The Greek word translated here as cut in pieces, or cut in two in some translations, is only used elsewhere in Scripture to mean dismemberment of animals used in sacrifices. In the book of Jeremiah, there is also reference to God speaking of punishment for some in Israel using the phrase “cut in two”: The men who transgressed my covenant and did not keep the terms of the covenant that they made before me, I will make them like the calf that they cut in two.9

As many commentators say, it seems that the term is not meant to be a metaphor, but to be taken literally to mean a brutal punishment, used in order to shock the listeners so they would make the right decisions.

The phrase put him with the hypocrites in the Gospel of Matthew is presented in Luke as assign him a place with the unbelievers.10 It’s possible that Matthew referred to “hypocrites” because throughout this Gospel, in particular in chapter 23, hypocrites receive severe condemnation. The word in this context should probably be looked at as a general term for those who make the decision against God. Weeping and gnashing of teeth expresses deep sorrow and emotion. This phrase is used seven times in the New Testament, all but once in the Gospel of Matthew, and in all cases in reference to those who have rejected God and are excluded from His blessings in the time of the end.

There are two views regarding what this parable means, or at least who it was directed to. One view is that the parable is focused on those who would have positions of leadership within the church, since it was described to the disciples, who became leaders in the early church. One author explains:

By portraying a slave in charge of other slaves within a household, and stressing the importance of his caring for the others while the master is away, the parable thereby signifies that leaders within the church are to care for the community properly between the ascension of Jesus Christ and his parousia. That proper care—feeding the household—will consist of a ministry of proclamation and teaching.11

The servant who chooses a leadership path which is ungodly portrays the type of church leadership which is selfish and self-focused. The words the prophet Ezekiel prophesied give a clear picture of such leaders:

The second view is that the parable speaks to Christians in general, and is not focused specifically on those in the position of leadership. The parable presents two contrasting ways of living one’s faith. One option is to be like the first servant, who faithfully and consistently does the job day in and day out. It doesn’t matter when his master returns, as he has continually done what has been asked of him. Whenever the master returns, he will be ready.

The second option is to have the attitude of the wicked servant. He put very little focus on the fact that the master would return, instead acting as if it happened at all, it would be so far in the future that there was no reason to give it much thought. The catch is, the master did return, and there was a judgment and a reckoning.

While it might seem that this parable is about two different servants—one who makes the right choice and the other who doesn’t—in fact it’s about one servant, faced with making one of two choices. The implication is that each believer is faced with a choice. Will we be faithful to the Lord? Will we live His teachings? Will we be ready whenever He returns, or when our lives are over? Or will our attitude be like the servant who lived as if there was no accountability, only to find out too late that there is, and we are being held accountable?13

The right choice is clearly the first one—to choose to base our lives on the teachings of Jesus, to be in a healthy relationship with God, to love Him and others. In living this way, we will be blessed not only in the present, but for all eternity.

6 Or slave—either is a legitimate translation for the Greek word doulos.