Teaching Others to Teach Others 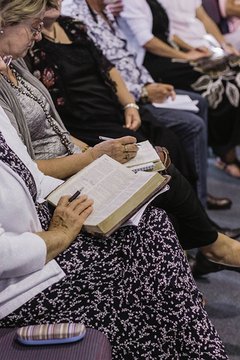 “The things that you have heard from me among many witnesses, commit these to faithful men who will be able to teach others also.”—2 Timothy 2:21

When Jesus was about to ascend into heaven, He commanded His disciples to go into all the world and preach the gospel. He said: “Go therefore and make disciples of all nations.”2 Part of the definition of the word “disciple” is someone who strongly believes in the teachings of a leader. By instructing His disciples to make disciples of all nations, He was saying that they should teach His teachings to others—something which He had done throughout His public ministry.

Jesus worked at teaching His followers what they needed to know to propagate the faith. He spent about three years teaching them all He could so that they would be able to carry on without His physical presence. This was a vital part of His ministry, as otherwise the news of salvation would not have spread throughout the world in their lifetime. And had the disciples not done the same, the message would have died out within their generation. Teaching others is an important element of discipleship and of the continuation of the faith.

There’s a difference between preaching and teaching. The Greek word used in the New Testament for preaching is kerusso (kay-roos'-so), which means to proclaim after the manner of a herald; also, to publish, to proclaim openly. The New Testament Greek word used for teaching is didasko (did-as'-ko), meaning to teach, to hold discourse with others in order to instruct them, to impart instruction, to instill doctrine into. Throughout Jesus’ ministry He did both—He preached and He taught, as Matthew 11:1 indicates: “When Jesus had finished instructing His twelve disciples, He went on from there to teach and preach in their cities.”

People recognized that Jesus was a teacher, as we see in His interaction with Nicodemus: “This man came to Jesus by night and said to Him, ‘Rabbi, we know that You are a teacher come from God, for no one can do these signs that You do unless God is with him.’”3 The Gospel of John also records: “Early in the morning He came again to the temple. All the people came to Him, and He sat down and taught them.”4

Jesus was a teacher. He taught both the multitudes and His disciples. His goal in preaching was to proclaim the kingdom of God. Through His teaching, He discipled individuals, and taught those who would, in turn, disciple others so that process could be repeated over and over, person by person, century by century.

The discipling that Jesus did resulted in your eventually being a disciple today. He discipled not just the 12 apostles, but according to what Paul wrote in 1 Corinthians 15, after His resurrection He appeared to the 12 and also to more than 500 other brethren, most likely disciples whom He had taught at least to some degree.

Discipling is key to the growth and continuance of Christianity. Without it, the church can’t grow. Without it, there would be no one to preach, to disciple others, and to carry on Christ’s commission.

To disciple someone, you don’t have to be a gifted Bible teacher or know all there is to know about God; rather, discipling means that you do what you can to help others along their spiritual path. Not everyone is a good teacher, but pretty much everyone can share some of what they have learned about faith, God, love, Jesus, and salvation with someone. You can give them a Bible or a New Testament or other reading material. You can try to answer their questions, or share what you have learned. You can pray with them, thus showing them how to pray and providing the spiritual support that comes when “two or three are gathered together in My name.”5

Teaching someone doesn’t necessarily mean guiding them through every stage of their Christian life, but rather sharing with them what you know, what you’ve experienced, and directing them to the Lord and His Word. Interacting with them will result in your adding to their knowledge of God; it will help them to grow in faith. Teaching others doesn’t necessarily mean having a formal class with someone; it can be having spiritual fellowship with them. It can be answering their questions.

Discipling someone doesn’t necessarily need to be something that is formal and methodical. It can be, but it doesn’t have to be. It’s often about friendship. Jesus called those He was discipling His friends: “I have called you friends, for all that I have heard from My Father I have made known to you.”6

The friendship aspect is so important! When you are walking with someone on their spiritual path, you want to play the role the Lord wants you to in bringing them into a deeper relationship with God. This is generally best done on a friend-to-friend basis.

I read an article some time back that makes the point of friendship being more important than trying to develop a teacher/student relationship with those we are trying to bring along the path of discipleship. The article was written by someone whose ministry is trying to strengthen and disciple men within the church.

Many years ago my wife and I got to know a couple at our church. We seemed to have a lot in common, so we invited them over. The husband had a real heart for discipleship, but his approach was hard to take. We stepped outside to chat and for the next two hours he tried to disciple me. I can’t even remember what he talked about because all I could think about was ‘Is this ever going to end?’ I wasn’t looking for a master/student relationship. I was looking for a friend. I could not wait for that night to end, and that relationship faded away. Even though his intentions were good, he made zero impact in my life. Even though I was struggling spiritually at the time, I needed a relationship more than a lecture.

When I meet men for discipleship, it is not a mentorship. It is a friendship. I learn from them and hope they learn from me. Just starting a Christ-centered friendship can be like laying a fire on dry wood that causes our desire for Christ to ignite. I love to discuss the Bible and I really enjoy being around men who enjoy the same. However, I don’t place anyone below me. We each stand on the same ground at the same level. Even if we are not at the same place spiritually, we can still be eye-to-eye in our friendship. Only in friendship can the walls come down and will we allow ourselves to have the vulnerability to share our real needs. This is a hard concept to get across. When someone comes to Christ, people try to disciple them as a leader instead of as a friend. A person is much more open to share struggles and ask questions to a friend than with someone on a pedestal.—Eddie Snipes

Of course, not every disciple is able to do all the things disciples do all the time. It’s understandable that in some circumstances you may not be in a position to preach or teach. But even if you aren’t preaching and teaching yourself at a particular time, you can still assist in spreading the teachings of Jesus, through your prayers and your pocketbook to help those who are able to preach Him and teach Him.

While Jesus was busy preaching, He also put an emphasis on teaching—on consciously discipling His converts. It’s disciples who carry on and propagate the faith, and since the goal is to make disciples of all nations, teaching is vital. Teaching makes stronger Christians out of those whom you lead to the Lord.

It’s in teaching, in grounding people in their faith, in understanding doctrine, in experiencing Jesus, in developing a closer walk with God, that disciples are born. Teaching others is a vital component of the Great Commission, of doing the job Jesus called disciples to do.