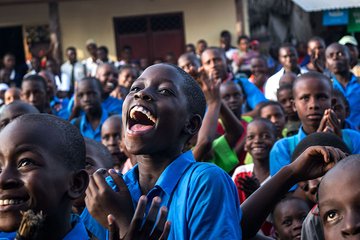 I want to talk about an evangelism and discipling method that has been an effective approach to preaching the gospel since Jesus first used it. It’s Bible storying. Through the centuries it has been implemented in one form or another. But now, in these modern times, it is sweeping the world rapidly. Following are some points about how it works and a few of the many examples of lives it has changed, which we’ve compiled from experts in this area who have had great success with this method.

Millions of people around the world can’t read, and millions more can’t read well, or come from what are known as oral cultures. In these cultures their primary learning style isn’t through literate means, and the printed word doesn’t shape their thinking to any significant degree. The fact is that oral learners can assimilate the same thoughts, ideas, and concepts that literate learners can, as long as the lessons are presented in a way that they can retain them.

Many of the world’s least evangelized people are typically oral learners and communicators. This makes sharing the gospel with them difficult; you can’t just give them a Bible or a tract to read. But you can reach them the same way Christians down through the ages have reached oral learners—through stories, which have been effective since the very beginning. According to the Bible, Jesus always used stories and illustrations when speaking to the crowds.1

In one Central African country, missionaries worked with a tribe for 25 years and only gained 25 converts. But when some of the young Christians from that tribe set the gospel to musical chants, the message spread like wildfire, and soon a quarter million of their people were believers. The message was the same as before, but the presentation was tailored to their oral learning style.

This method of sharing the gospel is known as Bible storying—telling key stories of the Bible orally, often employing music, dance, drama, and pictures as well to evangelize, make disciples, and plant churches “to the ends of the earth.”2

If you are a literate learner, this means you may have to adjust your way of teaching if you want to reach oral learners. Literate cultures tend to condense stories into bottom-line statements: principles, outlines, and a list of steps. Literate learners might be annoyed by a lengthy story; they just want the gist of the matter. Oral learners function differently. Oral learners carry their knowledge in stories, proverbs, or mental pictures of events, which they can remember and apply when dealing with the situations of life. They depend on their memory. They often have a remarkable ability to memorize long stories and make use of them or recite them. Ancient peoples were oral learners.

To convey the gospel effectively in oral cultures, it is a very valuable and sometimes vital asset to become effective Bible storytellers. Telling the stories of the Bible chronologically, forming one big story, rather than in unconnected ways, can help the hearers begin to understand each story in the context of God’s big story.

Mangal is a 33-year-old believer with a wife and five children, as well as a love for the lost. He lives in a refugee camp with thousands of others because of tribal warfare that destroyed their villages. He can read a little, but he and his tribe are oral learners. Mangal also knows how to share the gospel by Bible storying, sharing Bible stories from Genesis to Revelation, and singing songs that coincide with the stories.

Mangal wasn’t sure how to best witness, so he began working in the fields with others, while telling them stories. He also began singing his songs. Slowly people began to get interested. One evening when he was praying and singing by himself, a woman asked him what he was doing. He replied that he was praising his God. She asked if he knew other songs, and if he would teach them. So he did. Every evening after dinner, people gathered to sing with him.

After a few days, a small boy got sick, so Mangal asked the family if they believed that God could heal the boy, just like in the stories. But they had to believe in Him. He said that if they believed and prayed with him, the child could be healed. Within a week, the child was well. The boy’s family said, “We believe in your God. We want to follow Him.”

Missionaries from New Tribes Mission, Mark and Gloria Zook, began trying to reach the Mouk people in Papua New Guinea in 1983. They didn’t know how, so they decided to just tell the stories of the Bible in chronological order to the entire village of 310 people who gathered each morning and evening. Over the next weeks the Mouk people developed a sincere reverence for God, listening to the Old Testament, but they feared that He might destroy them because of their sins. Finally Mark introduced Jesus, born as a baby in Bethlehem, and He became their hero.

They were upset when they heard the story of Judas and how he betrayed Jesus. They had faith, though, that Jesus would somehow escape.

The next morning, Mark told the villagers the story of Jesus’ crucifixion and the resurrection, and went back through the Bible tying it all together. At that point, the lights really went on [in their hearts], and they began shouting, “EE-Taow! EE-Taow!” [“It’s true (or good); it’s very true!”]

That day almost the entire village received Jesus, and the normally restrained people celebrated for two and a half hours.

Mark then asked, “When are you going to go and tell the other villages about the good news?” Everyone got quiet.

Finally one man stepped up and said, “Yes, we will go, but we don’t know how to go about it.”

Mark replied, “I will show you how.”

Spontaneous celebration broke out again. After a few days of training, the men who were learning to teach set out, and the Word spread to twelve surrounding tribes.4

In the mid-eighteen hundreds the Lord called a man named Titus Coan to minister in Hawaii. He loved teaching the Hawaiians about Jesus, and he made the gospel interesting to them by telling them the stories, drawing pictures, and singing songs. The Hawaiian people put the Bible stories to music and dance and helped to spread the message to their neighbors. The church there grew rapidly and became one of the largest churches in the world at that time, in large part through this method.

One missionary said, “One of our close pastor friends in Benin5 shared: ‘God’s work is growing very rapidly in our area, and it’s because of the biblical education by Bible stories that we’ve been teaching in Fon (the local language). The men who have been in training have been returning to their towns and villages and using what they’ve learned to teach people what the Bible really says. Many people are saying that they are understanding what God is trying to tell them in the Bible, now that they are being taught by trained men who themselves have been taught how to glean what God is saying to them in the Bible, through learning the stories and learning how to analyze them in their heart language.’”6

3 Adapted from “Bringing the Good News to Oral Cultures,” by Samuel Poe.

4 Avery T. Willis Jr. and Mark Snowden, Truth That Sticks: How to Communicate Velcro Truth in a Teflon World (NavPress, 2009).

5 Benin, officially the Republic of Benin, is a country in West Africa. It is bordered by Togo to the west, by Nigeria to the east, and by Burkina Faso and Niger to the north.