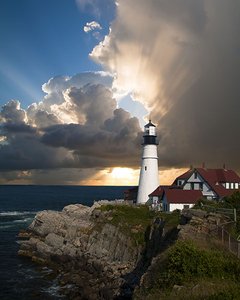 The popular world view today is that there is no absolute truth; there are only opinions. If there are only opinions, then one person’s opinion is no more valid than another person’s. Most discussions about Christ will simply be an exchange of opinions. The idea that there is truth has become alien to much of our thinking, with the criteria being if it seems to be good for me, then it must be true. And whether it is true or not, we then measure the benefit of a religion by the good it does its followers.

Jesus said, “I am the way and the truth and the life. No one comes to the Father except through me.”1 Peter said, “Salvation is found in no one else, for there is no other name under heaven given to mankind by which we must be saved.”2 Jesus Christ is superior to all that preceded Him, not because what He said was better or more complete, though it was, but because He is Himself the message and has absolute unmatched supremacy in God’s revelation.

… That is why the writer of Hebrews says, “Fix your thoughts on Jesus,”3 and “fix our eyes on Jesus.”4 Truth is decapitated when we sever it from Christ, which is what the Pharisees did, and consequently, knew nothing of spiritual life.

We can know the Scriptures inside out, but detached from Christ, it becomes a dead book. It would be like having a manual on a new car we have bought. We do not read the manual for the sake of reading. Rather, we want to get to know the car and be able to use it to its full potential. We are given the Bible so that we can know Christ and all that is made available to us in Him. There is an old hymn, “Break Thou the Bread of Life,” which has the great line, “Beyond the sacred page, I seek thee, Lord.” From Genesis to Revelation, every verse ultimately leads to Christ, and it is knowing Him that matters.—Charles Price

There are absolute truths that you can know, contrary to modern teachings that there are no absolutes. The modern teachers of that kind of non-absolutism philosophy would say, “You think that’s a hand, but you don’t really know it’s a hand; you’ve just always been taught it’s a hand!” They’d try to prove to you that it’s not possible to know anything with certainty, trying to tear down accepted truths of human existence and learning and religion. But we know and we believe that’s a hand, and almost anybody with common sense, even a little child, knows that’s his or her hand. So why try to tell them differently? You could say, “It’s actually an accumulation of 75% water and a lot of calcium and bone, and various kinds of minerals and substances, etc.” But it’s still a hand!

There are some things which you must accept as absolutely accepted truth, proven facts! Don’t let the theorists of non-absolutism try to tell you differently. The greatest absolute of all is God, which is why this doctrine against absolutism is a philosophy of Satan. By teaching that there are no absolutes, then they can say, “There’s also no God, no Bible, no morality. You don’t have to obey anything or anybody or keep laws. You don’t have to let anybody tell you what’s right or wrong; you can just do as you please!” And you wind up with chaos, anarchy, and confusion.

We as Christians and children of the Lord have to accept that there are certain things which we can know with certainty, which are proven from the Bible and from human experience for thousands of years, both spiritual truths and the ordinary everyday things of normal human life and existence.—David Brandt Berg

Truth is incontrovertible. Malice may attack it and ignorance may deride it, but in the end, there it is.—Sir Winston Churchill

It is a central heresy of our culture to say that all truth is relative; that one thing may be true for me and quite another may be true for you. This absurdity destroys the very notion of truth … and is the result of muddled thinking. No one can seriously believe that a belief which contradicts his or her own is just as true. The expression “It is true for me” is self-confuting. Either a thing is true or it is not. … Can we imagine saying, “Well, the earth is round to me; but it may be flat to you”? The earth is either round or flat; it cannot be both; and what you or I think about it is irrelevant. You may claim that religion and ethics is not a matter of truth at all. Very well, do not use the word “true”; but if you use it, do not render it unintelligible by adding that empty phrase, “for me.”—Keith Ward

Relativism is a revolt against the objective reality of God. The sheer existence of God creates the possibility of truth. God is the ultimate and final standard for all claims to truth—who he is, what he wills, what he says is the external, objective standard for measuring all things. When relativism says that there is no standard of truth and falsehood that is valid for everyone, it speaks like an atheist. It commits treason against God.—John Piper

Moral practice has always been difficult for fallen humanity, but at least there was always the lighthouse of moral principles, no matter how stormy the sea of moral practice got. But today, with the majority of our mind-molders, in formal education, or informal education—that is, media—the light is gone. Morality is a fog of feelings. That is why to them, as Chesterton said, “Morality is always dreadfully complicated to a man who has lost all his principles.” Principles mean moral absolutes. Unchanging rocks beneath the changing waves of feelings and practices. … How important is this issue? After all, it’s just philosophy, and philosophy is just ideas. But ideas have consequences. Sometimes these consequences are as momentous as a holocaust, or a Hiroshima. Sometimes even more momentous. Philosophy is just thought, but sow a thought, reap an act; sow an act, reap a habit; sow a habit, reap a character; sow a character, reap a destiny. This is just as true for societies as it is for individuals.—Peter Kreeft

Christianity, if false, is of no importance, and if true, of infinite importance. The only thing it cannot be is moderately important.—C. S. Lewis

It has been said that truth, by definition, will always be exclusive. Jesus claimed to be the Way, the Truth, and the Life. Historically we know that Jesus claimed such exclusivity. Had He not made that statement, Jesus would have been unreasonably implying that truth is all-inclusive, which is an impossibility.—Kim Triller