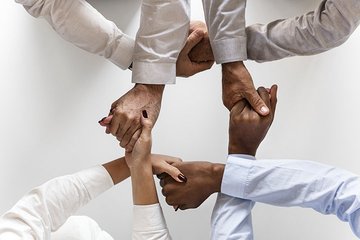 You see and hear it all the time—discrimination against minority races, minority religions, and minorities of all kinds, from governmental oppression and persecution to prejudiced individuals with their rude jokes and antagonistic behavior. What a stark contrast that is to the way God is and the way He wants us to be! The Bible tells us that "God shows no partiality" (Acts 10:34).

In just about every country, lines are sharply drawn between the rich and the poor, the educated and the uneducated, the predominant race and the minority races, the predominant religion and the discriminated-against smaller religions. The mainstream majority invariably denigrates and despises the minority.

Racial and religious discrimination and hatred are thriving in the world today. The Bible says that in the Last Days "the love of many shall wax cold" (Matthew 24:12), and this can be clearly seen in an increasingly hate-filled society. The news media is full of more and more headlines of bigotry, cruelty, and crimes against those who are different or hold differing views from the majority.

We must not let ourselves be influenced by or fall into society's way of dealing with differences between people. God has given us a better way, and that is to love one another.

In our dealings with others we must be very careful to "not judge according to appearance, but judge with righteous judgment" (John 7:24). Making a hasty judgment based on something negative that you hear is not wise, and is usually incorrect. There are at least two sides to every story. If we respond to the first negative word about a situation or people by rejecting any possibility of there being any good in them, then we are certainly guilty of judging a matter before we hear it in its entirety, and it will be "folly and shame" to us (Proverbs 18:13). We can't love or even sympathize with people unless we understand them, and we can't truly understand them without putting ourselves in their place or trying to see things from their perspective.

"Love the sinner—hate the sin!" This is a distinction we need to always make. We must not let the sin negate our love for the sinner. We must not see the sin as all-encompassing, for "love will cover a multitude of sins" (1 Peter 4:8). As the Bible says, "There is none righteous, no, not one" (Romans 3:10). We need to learn to see beyond the sins that are found in each person to the good that is found in each person. No one is all bad, and nothing is all negative. We need to look for the good and the possibilities in people and situations. Whether someone is black or white or yellow or brown, a Jew or a Gentile, Buddhist or Hindu or whatever, should have nothing to do with it. It's sin that the Lord doesn't like, not people's race or color or social status.

If people have to be free of their sins before we can love them, who will there be to love? If we start judging people on the basis of their sins, who will ever meet our standard? If the Lord kept a record of sins, who could stand? (Psalm 130:3). We're all hopeless without God's love, and that's the only thing that can save us! While God teaches hatred of sin, He shows great love for the individual sinner, just as He did for each of us.

God created people to be different, and He loves them all. His great love and grace reach out to all of His creations the same. He didn't make some that He loved less and others that He loved more. He doesn't love people with a certain color of skin any more than He loves people with another color of skin. If we show a prejudicial, belittling, demeaning spirit like that toward others, it must hurt Him very much.

We are supposed to love all people the same. Jesus gave His life for all humankind. How could He love one person more than the other, when He has shown the very greatest love possible by dying for each of them?

Like the universal heavenly Father that He is, God loves all people equally. When you're a parent, as your children come along, you love each one to the fullest. You put everything you can into each one according to their particular needs. You give your life over again for each one. And regardless of their differences, you love each one individually with as much love as you have to give.

That's how God loves. Can we love the same?