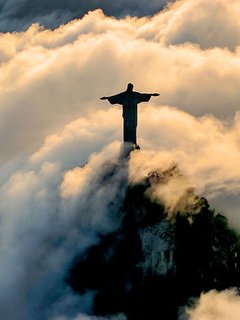 In the first part of The God-Man, we covered some of the things that Jesus said and did that affirmed His deity.

His disciples, those who lived and worked with Him for the years of His public ministry, who watched Him closely, all eventually came to the conclusion that He was God.

His followers were all Jews and therefore knew the Jewish Scripture intimately. They were keenly aware that, according to the Scripture, there was only one God and that worshiping another god was a sin punishable by death.

These men didn’t know Jesus was God when He called them to follow Him. They came to believe that He was the promised Messiah—the Christ. But the Jews generally were not expecting that the Messiah would be God. The Messiah was understood by the Jews of Jesus’ day to be the “anointed one”—like the kings of Israel were anointed ones—who was going to deliver Israel from the oppression of Rome. The disciples thought Jesus was going to be an earthly king, anointed by God. They did not expect their Messiah to be God Himself. Over time the disciples began to understand that Jesus was more than the Messiah, that He was God, but they didn't fully understand it until after His death and resurrection.

Even on the night of Jesus’ arrest, though He had forewarned them of it, they didn’t seem to fully comprehend what was happening and the events that were to come upon them. Earlier in the week they had heard their countrymen cheering Jesus with “blessed is He who comes in the name of the Lord,” and “hosanna in the highest.”1 Days later they heard the crowds crying out, “Crucify Him!”2

They saw Him preach to crowds of thousands and minister to individuals. They witnessed His miracles—they knew there had been only five loaves and two fish to start with, yet they gathered basketfuls when the meal was over. They saw Him walk on water, give sight to the blind, heal the lepers, and raise the dead. They saw Him arrested, whipped, and nailed to a cross. They saw Him die and be placed in a tomb. They despaired and hid in fear after His death. And then they saw Him alive again. They spoke with Him, they ate with Him, and forty days later they saw Him ascend into the clouds of heaven.

The events of Jesus’ life, death, and resurrection convinced these men—and many others who followed Him—that Jesus was not only the Messiah, but He was God. His disciples believed it so deeply that they preached it for the rest of their lives, even when doing so resulted in persecution, suffering, and martyrdom. Tradition has it that nearly all of the apostles were martyred for their faith, with only John dying a natural death.

Before His crucifixion, the disciples may not have fully understood who Jesus was and the significance of His death for the sins of the world. But after His resurrection and before His ascension, Jesus expounded on the scriptures which gave them a fuller understanding of the scripture and His role.

“These are My words which I spoke to you while I was still with you, that all things which are written about Me in the Law of Moses and the Prophets and the Psalms must be fulfilled.” Then He opened their minds to understand the Scriptures, and He said to them, “Thus it is written, that the Christ would suffer and rise again from the dead the third day, and that repentance for forgiveness of sins would be proclaimed in His name to all the nations, beginning from Jerusalem.”3 Then beginning with Moses and with all the prophets, He explained to them the things concerning Himself in all the Scriptures.4

From the day of Pentecost onward, the disciples preached Jesus’ divinity and wrote about it, and in this article we’ll include some of what they said. It is the writings in the New Testament—the Gospels and Epistles—which build the foundation for the core tenets of Christianity: the deity of Jesus, His Incarnation, and the doctrine of the Trinity.

The Jewish faith and blasphemy

All the first disciples and apostles were Jews. Paul, who wrote many of the Epistles that comprise the New Testament, wasn’t a believer in Jesus until a few years after Jesus ascended into heaven. Nevertheless, he is considered an apostle as well, and played a pivotal role in the development of the early Christian church and doctrine. He was not just a Jew but, as he put it, was a “Hebrew of Hebrews; as to the law, a Pharisee; as to zeal, a persecutor of the church; as to righteousness under the law, blameless.”5

For a Jew in those days, and especially someone as ardent as Paul, the Scriptures—the Law and the Prophets—were an integral part of their lives. They obeyed the Law, both the moral and the ceremonial law. It governed their lives. Their context, culture, and worldview were totally immersed in the Scriptures and the traditions that developed around them.

What Scripture said was wrong was universally understood to be wrong. If they disobeyed Scripture, they were in jeopardy of punishment for such disobedience, not just spiritually but physically as well. In their day, the woman who was taken in adultery would be stoned to death. Stephen, one of the early disciples, was stoned for what was considered blaspheming. Such were the laws that the Jewish people were governed by, and going against those laws resulted in consequences.

At the core of the Jewish faith, supported by Jewish law, was allegiance to God. Worship of the God of Israel was paramount. Faithfulness to Him and Him alone was at the center of their faith.

Earlier in Jesus’ ministry, after He had walked on the water, the Bible says His disciples worshiped Him, and made their declaration, “truly, You are the Son of God.”7 But after witnessing Jesus’ death and then seeing Him alive again, the disciples consistently worshiped Him as God. To do this was unthinkable according to Jewish law, custom, and culture. Yet the disciples were so convinced of Jesus’ deity that they crossed that barrier.

Testimonials of the New Testament authors

The authors of the New Testament books, a number of whom were apostles, state explicitly that Jesus is God.

Simon Peter, a bond-servant and apostle of Jesus Christ, to those who have received a faith of the same kind as ours, by the righteousness of our God and Savior, Jesus Christ.12 … waiting for our blessed hope, the appearing of the glory of our great God and Savior Jesus Christ.13 … Jesus Christ. He is the true God and eternal life.14 Thomas answered [Jesus], “My Lord and my God!”15

This last example of Thomas calling Jesus Lord and God is one of the most powerful references, because Thomas describes Jesus with two words which both mean God. John’s Gospel, originally written in Greek, used the Greek words Kyrios (Lord) and Theos (God). Kyrios was a translation of the Hebrew word Adonai (Lord) which the Jews used in place of YHWH, the name God revealed to Moses on Mount Sinai. Since the Jews did not speak the name YHWH, they instead referred to God as Lord.

The word God in this verse translates the Hebrew word Elohiym to the Greek word Theos, also meaning God. So Thomas is making a strong statement that Jesus is both YHWH and Elohiym, both Jewish names for God, by stating “my Lord (Kyrios-YHWH) and my God (Theos-Elohiym).” An Old Testament example of calling God both Lord (Adonai) and God (Elohiym) is found in Psalm 35:23, which says: Awake and rouse yourself for my vindication, for my cause, my God and my Lord!

Besides calling Jesus God and worshiping Him as such, the New Testament authors wrote that Jesus did, or can do, things that only God can do—beginning with the creation of all things.

All things were made through Him, and without Him was not any thing made that was made.16 Long ago, at many times and in many ways, God spoke to our fathers by the prophets, but in these last days He has spoken to us by His Son, whom He appointed the heir of all things, through whom also He created the world.17

The judgment of men in the afterlife, a divine prerogative which Jesus claimed, was also stated by the New Testament writers. For we must all appear before the judgment seat of Christ, so that each one may receive what is due for what he has done in the body, whether good or evil.19

The times of ignorance God overlooked, but now He commands all people everywhere to repent, because He has fixed a day on which He will judge the world in righteousness by a Man whom He has appointed; and of this He has given assurance to all by raising Him from the dead.20

Forgiveness of sin, another prerogative of God claimed by Jesus, is preached by the apostles.

God exalted Him at His right hand as Leader and Savior, to give repentance to Israel and forgiveness of sins.21 … the Lord Jesus Christ, who gave Himself for our sins to deliver us from the present evil age.22 … from Jesus Christ the faithful witness, the firstborn of the dead, and the ruler of kings on earth. To Him who loves us and has freed us from our sins by His blood.23

The heart of Christianity

The heart of Christianity is that Jesus is God. Believing this is what makes one a Christian. If He isn’t God, then the heart of our faith doesn’t exist and our faith is unfounded. Jesus claimed to be God. His disciples believed it, preached it, and began the Christian movement that has lasted for over 2,000 years, a movement which presently consists of over two billion people who believe this one fundamental truth.

The New Testament proclaims that Jesus existed before anything else, that all things were made by Him, that He entered into His creation by becoming man, that He forgives sins, that through His death and resurrection He has brought salvation and victory over death. His miracles all point to His deity, as does His unique relationship with the Father.

He is God, He is the Water of Life, the Light of the World, the Bread come down from Heaven, the Resurrection and the Life, He who forgives our sins and grants everlasting life to all who receive Him. The result of His life, death, and resurrection is the precious gift of God, our salvation.

Summary of “The God-Man,” parts one and two