The Rise of the Antichrist 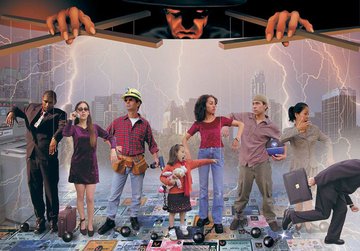 The most outstanding and ominous sign of the end of the world as we know it—a sign that the Bible devotes several key chapters to—will be the rise of a Devil-possessed tyrant known as the Antichrist, or "the Beast," who will set up a world government "over every tribe, tongue, and nation" (Revelation 13:7).

There are already signs that the world is heading toward the global government that this verse seems to imply. Many present international and supranational bodies, treaties, and protocols have at their core the promotion of regional or global cooperation and integration.

Globalization of the economy is a reality. Numerous trade bodies and treaties are already in place, such as the World Trade Organization, ASEAN, NAFTA, and Mercosur.

The Jerusalem peace accord

It appears that the Antichrist will rise to power on a political platform of peace, security, and economic stability. Like Satan himself, who can appear as an angel of light, this man will deceive most of the world into thinking that he is a great man of peace, a hero. The prophet Daniel wrote that "he shall come in peaceably, and seize the kingdom by intrigue" (Daniel 11:21). He confirms with many other leaders an international protocol that Daniel called "the Holy Covenant" (Daniel 9:27; 11:22-32).

Whether this world government that the Antichrist heads is already in power or it comes to power when this document is signed, we don't yet know. The Scriptures clearly state, however, that this covenant will have a planned duration of seven years, and that it will be pivotal to the Antichrist's claim to world leadership. This pact will also accomplish the seemingly impossible task of resolving the Middle East crisis, at least temporarily.

It seems the compromise between the Israelis and the Palestinians will include Jerusalem and its holy sites. A central issue will be Mount Moriah in Jerusalem, which is sacred to Jews (their Temple stood there before being destroyed by the Romans in 70 ad), and to Muslims (the Dome of the Rock, part of the Al-Haram al-Qudsi al-Sharif complex, the third most revered holy place in Islam, stands there today). Scripture indicates that the Antichrist's covenant will enable the Jews to rebuild their national temple, where they will revive their ancient rituals of animal sacrifice (Daniel 8:23-25; 9:27; 2 Thessalonians 2:1-4).

Visions recorded in chapters 2 and 7 of the book of Daniel indicate that the Antichrist will be associated with ten "kings" of nations that were once part of the Roman Empire, which included much of Western and Southern Europe. The book of Revelation says these ten will "give their power and authority unto the beast" (Revelation 17:13).

Although most of the world will initially hail the Antichrist as a political savior, three and a half years after the enactment of the seven-year covenant, he will revoke the peace pact. At this time he apparently will invade Israel and establish himself in Jerusalem, making that city his world capital (Daniel 11:45). His government will then outlaw all religions, except the worship of the Antichrist and an image of himself that will somehow be empowered to speak and "cause as many as would not worship [it] to be killed" (Revelation 13:14-15).

Jesus said that when you see this image, the "abomination of desolation, spoken of by Daniel the prophet, standing in the holy place [temple] ... then there will be great tribulation such as has not been since the beginning of the world" (Matthew 24:15,21). Thus the name given to this period is the "Great Tribulation." It will be a time when the Antichrist and his regime will institute a ruthless repression and persecution of believers in God (Daniel 7:21,25; 8:23-24; 11:31-35; 12:7,10; Revelation 13:5-7).

It is also at this time that the Antichrist government tries to impose the infamous "666" financial system globally.

This prophecy is remarkable. Think about it: Nearly 2,000 years ago the apostle John, who prior to meeting Jesus had been a fisherman by trade and had been called an "uneducated and untrained" man,2 predicted that a global economic system will one day be instituted in which everyone will be forced to receive a number, without which no one will be able to buy or sell. Only in this era of computers and electronic commerce could this prophecy be fulfilled.

We are well on the way to eliminating cash. A cheap and workable solution to eliminating it altogether would be to take a chip similar to those used in smart cards and place it under the skin of each man, woman, and child. It wouldn't even have to store all your personal data, but just a unique identifier. All your data could be stored in networked databases that your identification code would access. Once the chip is implanted, it could be read by an inexpensive scanner, similar in function to the ones that read bar codes in your local grocery store. You would then become your own smart card!

A global cashless society is in the making. Fiber optics, satellites, and computer databases have the potential to control the world in a way that boggles the imagination. Many governments and private corporations worldwide are pursuing policies to eliminate cash and checks, while many other countries are testing various methods of doing business without physical currency. For the first time, the hi-tech means of fulfilling the chilling vision the apostle John received nearly 2,000 years ago is here.

The power behind the throne

The Antichrist, the coming world leader who will demand the world's worship, will be empowered or possessed by Satan himself. "The dragon [Satan] gave him his power, his throne, and great authority" (Revelation 13:2).

Satan has always wanted to be God. This is why he fell in the first place. The prophet Isaiah wrote,

"How you are fallen from Heaven, O Lucifer, son of the morning! … For you said to yourself, 'I will ascend to Heaven and rule the angels. I will take the highest throne. … I will climb to the highest heavens and be like the Most High.' But instead, you will be brought down to the pit of Hell, down to its lowest depths" (Isaiah 14:12-15 TLB).

What Satan is really after when he causes the Antichrist government to set up the coming global financial system is to gain control over the people of the world and to get them to bow down and worship him.

The book of Revelation states six times that worshiping the Beast and receiving his mark leads to damnation. There is a definite link between the two, though at this point in time it is not clear exactly what that will be. At first glance, it would seem the Mark is simply an economic and identification system, but from what the Scriptures indicate, it can lead to much more.

So when you see a world government arise and its leader demands your allegiance and even your worship, don't fall for it. Regardless of the economic incentives offered or the retribution that threatens those who refuse his mark and number, give your love and worship to the true God, your Creator, who loves and cares for you and has promised to see you through the days ahead if you put your trust in Him.