The Pharisee and the Tax Collector 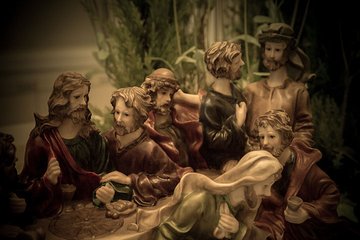 The parable of the Pharisee and the tax collector is only recounted in the book of Luke, chapter 18, verses 9–14. Among other things, this parable touches on the basic element of salvation. Let’s start by looking at the two characters in the story.

The name Pharisee means “separated” or “separated one.” They strove to observe the law of Moses, especially those laws that had to do with tithing and purity. Many Jews didn’t adhere to the purity laws concerning food, food preparation, and the washing of hands, so the Pharisees were careful about who they ate with so as not to become ritually unclean. Some of them criticized Jesus because He ate with sinners, and they looked down on His disciples because they ate with unwashed hands.1 They also criticized Jesus on more than one occasion for violating the Sabbath laws.2

Pharisees were known to go above and beyond when it came to religious matters. Most Jews did not adhere to the Mosaic law as strictly as the Pharisees did; therefore the Jews of Jesus’ day considered the Pharisees to be very righteous and pious.

There were three types of taxes which were required by the Romans, who ruled Israel during the time of Jesus: the land tax, the head tax, and the customs tax system. The taxes were used to pay tribute to Rome, which had conquered Israel in 63 BC.

The tax collector in the parable would have most likely been one connected to the customs system. Throughout the Roman Empire there was a system of tolls and duties that were collected at ports, tax offices, and at the city gates. The rates were between two and five percent of the value of the goods that were transported from town to town. On long journeys, a person bringing goods from one place to another could be taxed multiple times. The value of the goods was determined by the tax collector.

While there was some measure of control, tax collectors would often value the goods much higher than their actual worth, in order to make a profit. They would stop people on the road and demand these taxes, which could either be paid in currency or by forfeiting a portion of the goods. Those being taxed considered this institutional robbery.3 When some tax collectors came to John the Baptist to be baptized, they asked him what they should do, and he responded, “Collect no more than you are authorized to do”4—which is a sure sign that they were overcharging for their own benefit.

Tax collectors were despised. They were seen as extortioners and unjust. They were considered religiously unclean, and their houses and any house they entered were thus considered unclean. The hated tax collectors were often put in the same category as sinners and prostitutes5 and shunned by respectable people. The tax collector in the parable is certainly not an upstanding character; he’s a rotter and he knows it, as evidenced by his actions in the temple and his prayer.

He [Jesus] also told this parable to some who trusted in themselves that they were righteous, and treated others with contempt.6

Luke gives an introduction explaining that the parable is in regard to those who think that they can attain righteousness through their own merit. Jesus is telling this parable to those who trust in themselves, who feel they are righteous, and who consider others inferior and undeserving of respect.

Two men went up into the temple to pray, one a Pharisee and the other a tax collector.7

The words “went up” and later in the parable, “went down,” refer to the elevation of the Temple Mount, which was the high spot of the city. It was customary to pray twice a day, once in the morning and once in the afternoon, as this was when the two daily sacrifices for atonement were offered in the temple. The original listeners would assume that the Pharisee and the tax collector were going up to the temple to attend one of the daily atonement sacrifices and to pray.

The Pharisee, standing by himself, prayed thus: ‘God, I thank you that I am not like other men, extortioners, unjust, adulterers, or even like this tax collector. I fast twice a week; I give tithes of all that I get.’8

The Pharisee stood by himself when he prayed; he separated himself from the other worshippers. If his clothes touched the clothes of a person who was unclean, then he would be unclean too. And as one who was meticulous when it came to being pure and holy, that just wouldn’t do. He stood as he prayed and lifted his eyes upward, both of which were the custom in Jewish prayer.

It was also the custom to pray out loud, so there is a good possibility that others could hear his prayer. It could be that he meant his prayer to be a “preachment” prayer, you know the kind—where a person prays in a manner that is intended to preach a sermon to others rather than truly addressing the Lord.

Considering that Jewish prayers in the first century was generally either confession of sin, thanks for blessings received, or petitions for the person praying or for others,9 there is the likelihood that he was more intent on preaching than praying. He doesn’t confess any sin, he’s not thanking God for any of his blessings, and he isn’t asking for anything for himself or others. He seems to be pointing out to others how bad they are, and showing contempt for them, and publicizing his own righteousness and obedience to the law. He’s comparing himself to others and pointing out how religiously conscientious he is compared to them.

The Pharisee looks down on others who don’t keep the law as he does. He shows disdain and disgust towards others and thanks God that he “isn’t like them.” He views himself as the epitome of righteousness, and the original audience of the parable would have seen him that way as well.

The tax collector’s demeanor and prayer are completely different: But the tax collector, standing far off, would not even lift up his eyes to heaven, but beat his breast, saying, ‘God, be merciful to me, a sinner!'’10

The tax collector stands far from others, not because he’s righteous, but because he’s a sinner and he knows it. He won’t lift up his eyes to heaven because he feels unworthy. He extorts money from others by overcharging them. He’s a swindler. He doesn’t feel that he deserves to be standing with God’s people, or that he’s worthy of conversing with God.

He’s standing apart, beating his breast, and he prays: “God, be merciful to me, a sinner.” The tax collector is asking for an atonement for his sins. His cry isn’t for general mercy; it’s for atonement, for the forgiveness of his sins.

Jesus ends the story with: I tell you, this man went down to his house justified, rather than the other. For everyone who exalts himself will be humbled, but the one who humbles himself will be exalted.11

This ending was a shock to the original listeners. The Pharisee would have been seen as the righteous, respected one, as he not only obeyed the law but went beyond it. The tax collector, on the other hand, would have been considered the sinner. He was hated and reviled by virtually everyone, and with good reason; there was no way he could be seen as being righteous.

Yet who does Jesus say goes to his house justified, made righteous?—The one who is confident in his own righteousness due to his good works, or the one who cries out to God for mercy? Is it the one who is seen by others as holy?—The one who looks down on others as not being as religious as himself, and who separates himself from those who are unclean and sinful? Or is it the one who knows that he’s a sinner, who humbles himself, knowing that no amount of works could save him, who looks to God in true repentance for His mercy, forgiveness, and salvation?

When it comes to God’s saving grace, the one who humbly acknowledges his or her need for God is the one who receives salvation. Not those with the exalted self-opinion, who trust that their good works and religiosity are going to save them. Now don’t get me wrong; doing good works that help others is good, but those works aren’t what get you saved. You don’t earn a bunch of good points that cancel out your bad points. You can’t earn salvation or forgiveness for your sins. It’s simply a beautiful gift offered by God.

While this parable speaks of the need for personal humility before God in prayer, and warns against being self-righteous about our own works and looking down on others with scorn, contempt, and a judgmental attitude, its most important message is about God’s grace. The message is that our works don’t save us; God’s grace does. God has made a way for our sins to be forgiven and for us to enter into a right relationship with Him because of His great love, mercy, and grace. We are “righteous” before God because our sins have been atoned for, not because of our observance of religious laws.

For by grace you have been saved through faith. And this is not your own doing; it is the gift of God, not a result of works, so that no one may boast.12

The parable reveals that God is not a God impressed with pious acts and feelings of superiority, He is, rather, a God of mercy who responds to the needs and honest prayers and repentance of people.13 As it says in Isaiah 66:2: “But this is the one to whom I will look: he who is humble and contrite in spirit and trembles at my word.”

God is a God of love and mercy. He loves humanity and He made provision for us to be saved through Jesus’ sacrificial death. He’s passionate about saving all people, even those who seem to be the worst sinners in the eyes of the world, people like the tax collector in this parable. As Christians, we should do all we can to help others know Him through living our lives in a manner that shows the love, mercy, and understanding that our loving Savior has shown to each of us. And then, to share with others the wonderful news that the way to know God is simply to accept His free gift of salvation by grace.