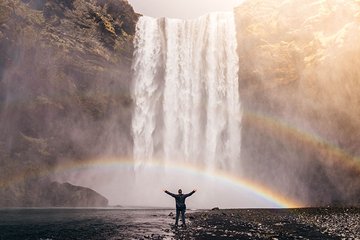 I can never forget the day when it dawned upon my consciousness as a reality, a fact, that the promises of the Bible were practical, that they could actually be applied to my everyday needs. It was a revelation to me that God meant exactly what He said in the numerous promises given in His Word, and that He would fulfill them to the very letter if I, in faith, would reach out and claim them in a definite manner.

God’s Word said that I had been given “exceedingly great and precious promises,” that through them I might be “partaker of the divine nature.” (2 Peter 1:4) But to my limited understanding, those promises were only beautiful scripture language, never meant to be taken seriously or applied practically.

I was like the very ignorant woman many years ago who had lived most of her life hidden way back in the highlands of Scotland, and who was so poor that her church had to pay her rent for her.

One day when her pastor brought the monthly rent, he said, “Mrs. McKintrick, why is it that your boy does not support you? I understand he has a very good job in Australia, and that he is a good boy who loves you dearly. Is this not the case?”

“Oh yes,” said the mother, “and he never forgets me. Every week he writes me the most loving letter.”

Curious to know more about a son who could so love his mother and yet leave her without support, the pastor asked to see some of the letters.

Soon the woman returned with two packages. “These are his letters,” she said, handing him the first package, “and these are the pretty pictures he sends me with every letter. They fit nicely in the letter, and it shows he thinks about me.”

“A picture in every letter.” The pastor was more curious than ever. “May I see them also?”

“Oh, surely,” she answered. “Some are of a man’s head, some of a man sitting on a horse, and some have the king’s picture on them. See, this one here has the King of England. Long live the king!”

“Long live your son!” said the astonished pastor. “Why, my dear friend, do you know that you are a rich woman? This is money. You have wealth here! And to think of how you have suffered and done without, when right here in the house all the time you had riches that you thought were just pretty pictures!”

This was surely my trouble when it came to the promises in God’s Word. I thought they were just pretty pictures, just beautiful language. Little did I realize just how literally God wanted me to take His promises!

In God’s Word you and I have been given exceedingly great and precious promises—and there are hundreds of them. Limitless resources! Streams that never run dry.

Prayer is first a means to an end, a connecting link between our human needs and God’s divine resources. Prayer is not meant to be a “pious reverie” that has only a subconscious effect on us. Prayer is an intensely practical thing, as real, as uniform, as genuine as using the telephone. And the party at the other end of the line—God Himself—says to us, “Ask and it will be given to you. You do not have because you do not ask.” (Matthew 7:7; James 4:2)

It is our part to do the taking, His to do the giving. The Scripture says, “Whatever things you ask when you pray, believe that you receive them, and you will have them.” (Mark 11:24) When we ask in prayer, then is the time to believe—and if we do, we will receive.

“Now this is the confidence that we have in Him, that if we ask anything according to His will, He hears us. And if we know that He hears us, whatever we ask, we know that we have the petitions that we have asked of Him.” (1 John 5:14–15) It does not say we are going to have, but it says we have. We have it now, not because any of our senses testify to it, but because God has said so.

Attempting to teach the principle of appropriating faith to the members of his church, a preacher once offered his expensive pocket watch to a group of boys sitting on the front row.

“Sonny, would you like to have this watch?” he asked the oldest boy. “You can’t fool me! I know you don’t mean it,” answered the boy.


The question was repeated to the next boy, and again and again down the line. Each time came a similar answer. At last the preacher offered the watch to a little fellow about five years old, who was sitting on the edge of his seat, his bright, eager eyes focused intently on the preacher’s face.

“Little man, would you like ...” That was enough. A chubby hand quickly grabbed the watch and instantly pocketed the gift. While wiggling back on the seat, the boy said with a satisfied, grown-up sigh that it was just what he had been wanting all the time.

After the service, the other boys crowded around the preacher and protested. “How were we supposed to know you really meant it?” “That’s just the kind of watch I was wanting.” “If you really meant it, why didn’t you put it in my hand, or ask me again, so I’d know?”

Only the youngest boy had appropriating faith, and he put his faith into action.

Many people believe the promises of God, but in sort of an impersonal, indefinite way: “Oh yes, they apply in general, but not specifically to me or this situation.” Whereas the person who gets results is he who, when he has asked God for something, acts on his faith and proceeds as if he possesses. He takes God at His Word on some promise and counts it done. This is often called the “stand of faith.”

A splendid illustration of this is found in the Bible passage where Jesus told the lepers who came to Him for healing to go show themselves to the priest for cleansing. Jesus hadn’t healed them yet, but the scripture says that, “As they went, they were healed.” As they put their faith into action and obeyed, even though they hadn’t yet seen the answer to their prayers, God met them. (Luke 17:12–14) When we put forth the effort of a believing will, God honors that step and meets us. As someone once said, “When faith goes to market, it takes a basket along.”

The stand of faith

One time I had prayed and done everything else that I knew to do, yet there was no answer to my prayer. I had come to the end of myself and could do nothing more. Why didn’t God answer?

As I turned the pages of my Bible and prayed, my eyes fell on these very words: “Having done all, stand.” (Ephesians 6:13) Immediately I saw the truth. I had been virtually blaming the Lord for not answering my prayer, when I had not been doing my part at all. I hadn’t taken the stand of faith.

So I began to praise and thank Him that the answer was on the way. Within six hours I saw that answer, but it was no more mine then than when I had first taken the stand of faith. It had already been mine by faith. We see because we have believed, not believe because we have seen.

So make the connection with God today through prayer, bringing your requests to Him and claiming His promises. He never fails!