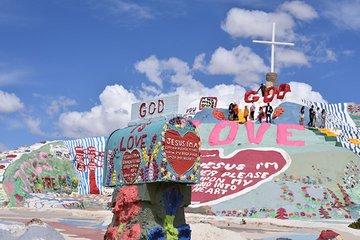 “Faith comes by hearing, and hearing by the Word of God” (Romans 10:17)—and faith can even come from hearing your word, your testimony, your witness, your letter containing the Words of God to a friend, relative, or other interested party.

I’m reminded of a true story I heard when I was young, about a crippled boy named Tommy who lived in poverty with his aunt in a small third-story apartment of a rundown tenement on a busy city street. He was so severely handicapped that all he could do was lie helplessly in bed.

One day Tommy asked a newsboy friend of his to bring him the book about “the Man who went about everywhere doing good.” The newsboy searched and searched for this unnamed book, until one book dealer finally realized that Tommy must have been talking about the Bible and the story of Jesus. The newsboy scraped together what little money he had, and the kindly bookseller gave him a copy of the New Testament, which he took back to Tommy.

The two boys began to read that book together, and after a time Tommy understood the message of salvation it contained. He received Jesus as his Savior and decided that he, too, wanted to do good like the wonderful Man in the book. But Tommy was crippled and could not even leave his little apartment, so he prayed and asked Jesus to show him what he could do, and the Lord gave him an idea.

Tommy began to copy helpful verses from the Bible onto little pieces of paper, which he would then drop from his window to flutter to the busy street below. Passers-by would see them drifting down and out of curiosity pick them up and read the words from the Man who went around everywhere doing good—Jesus Christ. Many were helped, encouraged, and comforted, and some were even saved through the simple ministry of this boy and his New Testament.

One day a wealthy businessman found Jesus through reading the verse in one of Tommy’s little notes. He later returned to the spot where he had found the scrap of paper that had led him to the Lord, hoping to find some clue as to how it got there. Then he noticed another little bit of paper floating down to the sidewalk. He watched as a poor, tired old woman stooped painfully to pick it up, and noticed her countenance brighten as she read it. There seemed to be new strength in her step as she journeyed on.

The businessman, now fixed to the spot, kept his eyes glued upward, determined to find the source. He had to wait a long time, for it took poor Tommy many painful minutes to scrawl even one verse on one of those pieces of paper. Suddenly the businessman’s eyes were drawn to a certain window as he saw a scrawny arm reach out to drop another piece of paper, like the one that had brought a whole new life to him. He carefully noted the location of the window, dashed up the stairs of the tenement, and finally found Tommy’s humble abode.

The businessman and Tommy soon became good friends, and the businessman brought Tommy all the help and medical attention that he could. Then one day he asked Tommy if he would like to come and live with him in his palatial mansion outside the city.

Much to his new friend’s surprise, Tommy answered, “I’ll have to ask my Friend about that”—meaning Jesus.

The next day the businessman returned, eagerly seeking Tommy’s reply. Instead, Tommy asked him some rather surprising questions.

“Where did you say your home is?”

“Oh,” said the businessman, “it’s in the country, on a large and beautiful estate. You’ll have a room of your own, servants to care for you, delicious meals, a good bed, every comfort and attention, anything your heart desires, and my wife and I will love you dearly and care for you as our own son.”

Hesitantly, Tommy queried again, “Are there any people that would pass under my window?”

Surprised and somewhat baffled, the businessman replied, “Why, no, only an occasional servant, or perhaps the gardener. You don’t understand, Tommy, this is a gorgeous country estate, far from the tumult of the city. You’ll have quiet there and be able to rest and read and do whatever else you want, away from all this filth and pollution and noise and the busy throngs.”

After a long and thoughtful silence, Tom’s face looked very sad, for he hated to hurt his friend. Finally he said quietly but firmly, with tears in his eyes, “I’m sorry, but you see, I could never live anywhere where people don’t pass under my window.”

Here is the story of someone so helpless and so isolated that you might have thought he could never have had any opportunity to help others, but love found a way!

Someone passes under the window of your life every day. Has your love found a way to help them? Has Jesus shown you how you can help them? He will if you want to, no matter what the conditions or your limitations.

God has windows too, and He has promised that if you obey Him and open the window of your life to others, He “will open for you the windows of Heaven, and pour out for you such a blessing that there will not be room enough to receive it” (Malachi 3:10).