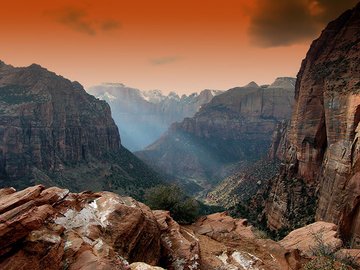 Think of when Jesus miraculously multiplied five loaves and two little fish and made enough to feed a crowd of 5,000 men, not counting the women and children!1 Imagine being one of the disciples distributing that unending supply of food! They were probably overflowing with the electric sensation of being part of a miracle. They must have felt like they were walking on air.

But when we next see them, they’re in a boat in a raging storm, facing waves that are threatening to drown them. In the midst of their fear and despair, Jesus comes to them, walking on the water, and says, “It’s me. Don’t be afraid.”2

It’s interesting how the disciples had those two experiences one right after the other. What a day! First, they’re on a giddy pinnacle of happiness, witnessing their Lord’s abundant supply and blessings, and the next thing you know, they’re fearing for their lives in a wild storm.

Perhaps Jesus did that to show His disciples that living for Him wasn’t only sunshine and gladness. That there are also raging storms that threaten to drown us with fear and doubt. He may have been trying to prepare them for both scenarios.

Actually, it’s often those times when the storms of life overtake us, when waves of doubt and fear rise up against us, that we see Jesus most clearly. When everything we’ve trusted in has fallen away, our vessel is filling up with water and sinking, if we call out to Him: “Master, we perish!” we too will see Him walking on the water toward us. And He will say the same thing to us as He said to His disciples: “It’s me. Don’t be afraid.”