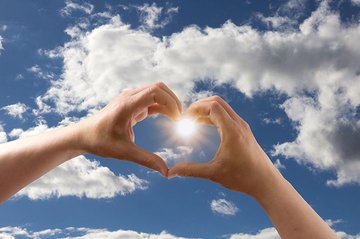 God loves unconditionally. What does unconditionally mean? We could say that God’s love has no bounds, is unchanging, and without limitations. Unconditional love is sometimes defined as a love that is “given freely” to the loved one “no matter what.”

Each of us has sinned, and sin brings separation from God, and there is nothing we can do by ourselves to repair that breach. Nevertheless, God loves us. His love isn’t dependent on us, as we can’t earn His love. He loves us despite our sinful nature. He loves those who don’t love Him. He loves us all “no matter what.” It doesn’t mean He loves all that we do, but He loves us. In fact, He loves humanity so much that He made it possible for the breach caused by our sins and wrongdoing to be bridged through the sacrificial death of His Son, Jesus. Though we are sinners, God, because of His love for us, made it possible for us to be reconciled to Him.

As it says in Romans, chapter 5: “You see, at just the right time, when we were still powerless, Christ died for the ungodly. Very rarely will anyone die for a righteous man, though for a good man someone might possibly dare to die. But God demonstrates his own love for us in this: While we were still sinners, Christ died for us.”1

God loves us not because of who we are but because of who He is. He is the creator of all things. He’s the Almighty. He is all-powerful and knows everything, and yet He loves you and me. In fact, not just you and me and those of us who are Christians and who appreciate the great sacrifice He made in giving His only Son to die for us, but He loves every single person in the whole world equally and unconditionally. He loved us before we believed in Him, before we loved Him. Even if someone has never heard of God the Father, even if someone says they hate Him, He still loves that person unconditionally. God’s love is unfathomable. It is perfect. It is unconditional.

The foundation point for us as Christians in helping to meet the needs of those we come in contact with, regardless of whether those needs are physical or spiritual, is the understanding that every person is precious to God, regardless of age, race, nationality, physical appearance, economic status, religious belief, political affiliation, or sexual orientation. None of that matters; everyone is loved by God. He loves the beggar on the street as much as He loves the richest man in the world.

God asks that we value every individual, that we see humankind through His eyes of love, which means that we will look at others without bias, prejudice, or preconceived negative opinions. By embracing God’s perspective and seeing others as He does, we will avoid stereotyping people, or thinking of ourselves as better than others.

We don’t have to like every person’s belief system, lifestyle, or choices. We may not agree with them. They may live without regard to God’s moral standards, they may live lives of grave sin, but no matter what their state, God loves them. “He causes his sun to rise on the evil and the good, and sends rain on the righteous and the unrighteous.”2

Each person on earth is God’s creation just as we are, and God loves them just as He loves us. We are all equal in God’s eyes. God loves each human being, and Jesus died for each human being. We are instructed to love people, and to show God’s love in both practical and spiritual ways, to the best of our ability.

Jesus said that the two most important commandments are to love God and to love others.3 When we remember that Scripture says that every human being is made in the image and likeness of God, that love is of God, that God is love and He loves us all,4 then the awesome love of God becomes our touchstone; it’s an example of how we should love others. When we look at this benchmark, we understand that we are to emulate God’s attributes of love, compassion, and mercy, just as Jesus did.

We are told to let our light so shine that others may see our good works and glorify God.5 This is a call to action, as it expresses the understanding that God intends for us to interact with others in a manner that reflects Him. It’s a call to emulate Him, to treat others with love, compassion, and mercy. We’re called to be conduits of His beautiful, unconditional love to others. This, like many other things on the path of discipleship, often requires some sacrifice. But when you think about Jesus’ sacrifice for us, there really is no comparison.

The story has been told of a little girl named Liz who was suffering from a rare and serious disease. Her only chance of recovery appeared to be a blood transfusion from her five-year-old brother, who had miraculously survived the same disease and had developed the antibodies needed to combat the illness.

The doctor explained the situation to her little brother, and asked the little boy if he would be willing to give his blood to his sister. He hesitated only for a moment before taking a deep breath and saying, “Yes, I’ll do it if it will save her.”

As the transfusion progressed, he lay in bed next to his sister and smiled, as all did, seeing the color returning to her cheeks. Then his face grew pale and his smile faded. He looked up at the doctor and asked with a trembling voice, “Will I start to die right away?”

The little boy had misunderstood the doctor; he thought he was going to have to give his sister all of his blood in order to save her.6

What a tender and beautiful example of love! The Bible says, “By this we know love, that he laid down his life for us, and we ought to lay down our lives for the brethren.”7

James, the brother of Jesus, expressed that the true practice of our faith consists of both outward and inward action. Outward toward others in practical ways, and inward through our devotion to God. He said: “Pure and undefiled religion in the sight of our God and Father is this: to visit orphans and widows in their distress, and to keep oneself unstained by the world.”8

Manifesting our faith is not only inward activity; we are called to express it through our Christlike, Christ-emulating actions. This calls for sacrificing time we would use for ourselves, and instead giving it to others. It’s letting go of previously made plans in order to help others in need. It’s living our faith by intentionally doing things for the benefit of those in need.

In his book Well Done, Thomas said, “Roll-up-your-shirt-sleeves Christians see Christianity as faith and action. They still make the time to talk with God through prayer, [they] study Scripture with devotion, [they are] super-active in their church and take their ministry to others to spread the Good Word.”9

As Rick Warren said in The Purpose Driven Life: “In heaven God won’t say, ‘Tell me about your career, your bank account, and your hobbies.’ Instead he will review how you treated others, particularly those in need.”10

Jesus set the example of the “roll-up-your-shirt-sleeves” concept. He constantly showed love to others. He felt compassion for those in need and was moved to loving action. He was merciful. He showed kindness. He fed the hungry and healed the afflicted. He fought against evil and unrighteousness.

Jesus said: “Truly, I say to you, as you did it to one of the least of these my brothers, you did it to me.”11 Let’s do what we can to be tangible examples of God’s love for humanity, by following what He shows us to do to share Him and His love with those in need, spiritually through introducing them to Jesus, and practically through ministering to their other needs.